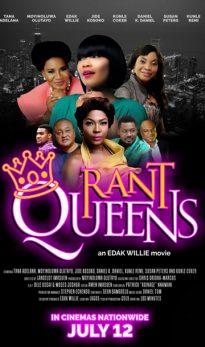 The movie Rant Queens has come to establish the fact that social media is a powerful tool in the hands of those who know how to use it well. It has so much power that it can cause a rift between a mother and her daughter.

Produced by Moyin Olutayo with Edak Williams as the executive producer, Rant Queens is a movie that tells the story of a meddling mother who clashes with her controversial blogger daughter in a series of rants. While trying to get her married, she ends up becoming a competition to her.

Slated to be in the cinemas from July 12, 2019, Rant Queen is catching in on the advent and spread of the usage of social media to advance different causes.

As part of the line up events for the premiere, the private screening of the movie is set to take place at Terra Kulture on the 11th of July 2019 by 4pm and that is coming after the press screening which held on Thursday, July 4th at Genesis Cinemas, Maryland.