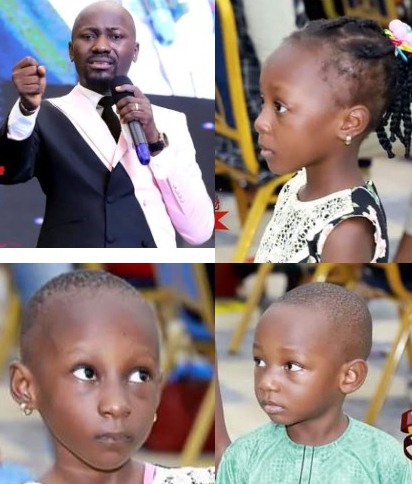 The founder of Omega Fire Ministries (OFM) worldwide, on Sunday 27th of June, 2021, was once again in his charity mood as he shocked a woman whose husband abandoned with three children, with an amazing life-saving package.

A statement by the OFM media office said that the family was located by the servant of God during the prophetic session after admonishing the congregation with the message titled, Commanding Answers to Prayers’.

“It was a family liberation service for them as Apostle Suleman mentioned two sisters having their eldest with them and many others,” the statement reads.

For over three years, this woman had been reportedly abandoned by her husband with their three children who later dropped out of school due to lack of funds.

The situation eventually left the woman with no choice than to relocate to live with her mother who has since been feeding and paying the children’s home lesson fee from her pension.

Characteristic of Apostle Suleman and his wife, Dr. Lizzy Johnson Suleman, who have always been available to lift the poor, the couple announced a surprise support package for the woman with scholarship for the three children and a monthly allowance of N50, 000, for the next five years.

It was indeed an answer to prayer for the lady who had given up all hopes since her husband left.