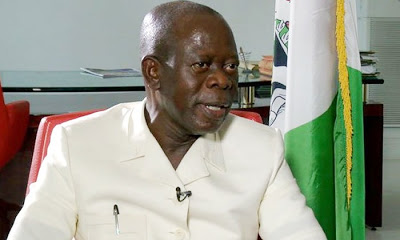 The chairmen of the All Progressives Congress across the country are warming up for a storming session on Sunday over their grievances with the national leadership of the party.

The meeting, which our correspondent gathered would hold in Abuja, is to review developments after the expiration of the 10-day ultimatum issued to the National Working Committee under the APC National Chairman, Adams Oshiomhole.

Recall that the Forum of APC state chairmen had on September 23 issued the ultimatum to the NWC to address their perceived concerns.

Among their concerns are failure to secure appointments for party loyalists and vacant leadership seats in the party.

The position of the National Secretary has become vacant following the swearing-in of the last occupant, Mai Mala Buni, as Governor of Yobe State.

Also, the Deputy National Chairman (South), Niyi Adebayo, was recently appointed as the Minister of Industries, Trade and Investment.

The National Auditor of the party, George Moghalu, has also been appointed as the Managing Director of the National Inland Waterways Authority.

The ultimatum has expired without the chairmen getting any concrete response from the party national leadership.

The chairmen had in their letter to the NWC alleged that they were being treated as outsiders in the party they worked to secure victories for in the last general elections while those who worked against the party were being rewarded.

The secretary of the forum and Enugu state APC chairman, Dr Ben Nwoye, confirmed the meeting to our correspondent on Friday.

He said, “Yes, it is true that we are meeting on Sunday and the notice of the meeting has been sent to members of the forum.

“We have our periodic meeting where we analyse developments in the party, so it is a routine meeting.”

When prodded further, he added, “Certainly, the issue surrounding our letter to the NWC will be discussed. We will discuss the way forward. But it is a meeting for all; decisions will be made collectively, and not in isolation.”

It was earlier reported that the growing disenchantment of the state chairmen and their frustration to get appointments for loyal members.

One of them had complained about how their efforts had not been rewarded by the party.

VIDEO: Girl beats her boyfriend mercilessly for cheating on her