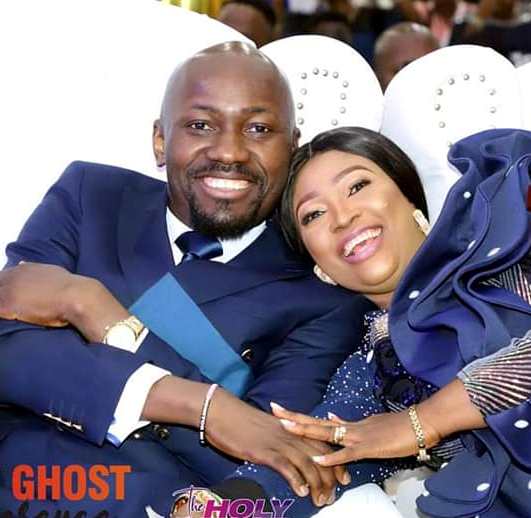 Insiders say the celebrity couple didn’t restrict their intimate romantic show to the confine of their marital bedroom, but the feelings were taken to the public as they reportedly pampered each other in the full glare of members of their Omega Fire Ministries (OFM) at a special church service organized to mark the occasion. The couple were said to have brought back the memories of the dating years by engaging in a long session of intense cuddling and romantic dance moves to the admiration and applause of the audience that included other OFM top ministers.

“Today is my 17th year marriage anniversary,” the Restoration Apostle, as Suleman is fondly addressed, announced earlier on June 5. Continuing, he said sending a cute, thankful message to his spouse; “Thanks, Baby, for being a golden treasure and a formidable anchor.”

Church insiders spoke of how the Apostle and Reverend Johnson Suleman attempted to recreate events as if it was their first date on June 5. They reportedly conjured up old memories, renewing their wedding vows and were obviously filled with sentimental feelings of the love of their youth days once again, while they shared some special songs at the altar.

For Reverend Lizzy Suleman, personally, the wedding anniversary was a perfect excuse to demonstrate humanity as she reportedly gathered up the poor and the needy few days ahead of the celebration to share words of love, food and cash gifts with many.

Married in 2004, the union between the Sulemans has produced six cute children. In a press interview during the celebration of their 12th wedding anniversary, the loving couple said their secret to a happy marriage was listening to each other.

Reverend Lizzy also had a romantic line for her beau: “Through thick and thin, God has been there for us. 17th marriage anniversary and still counting. Love you, honey. You’re the best. Honey, you’re an amazing person, an angel in human form.Thank you for being my mentor, lover and friend, my best friend for life. Thank God for the gift of you. Our union will continue to wax stronger and brighter in Jesus’ name. We shall continue to bask in the euphoria of God’s glory and grace, till Jesus comes. I love you.”