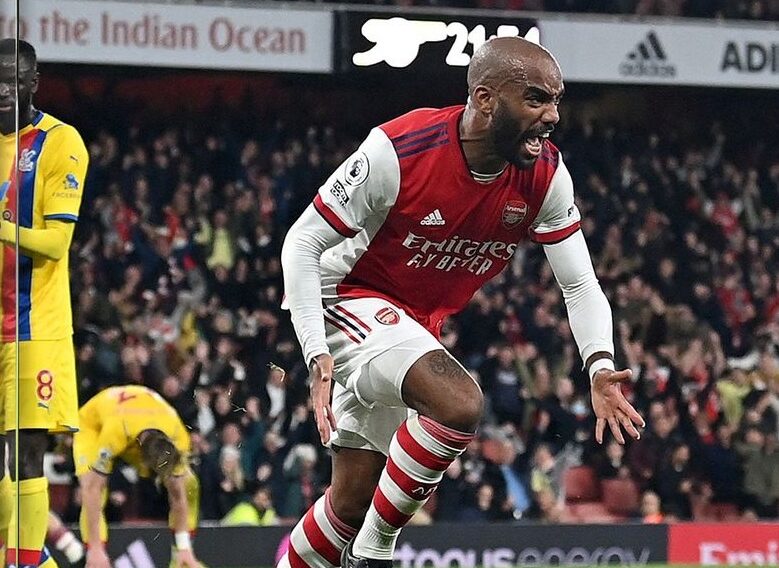 Alexandre Lacazette hit a 95th-minute equaliser for Arsenal to cancel out a Crystal Palace turnaround at Emirates Stadium.

Christian Benteke and Odsonne Edouard had set Patrick Vieira on his way to a fantastic win on his return to the Emirates, after Pierre-Emerick Aubameyang’s opener.

But super sub Lacazette made good on his early promise to finish off a goalmouth scramble and steal a point for Mikel Arteta.

Arsenal came out with an urgent pressing game and desire to move the ball quickly – and it paid almost immediate dividends.

Nicolas Pepe and Takehiro Tomiyasu swapped a delightful one-two on the edge of the area and the Ivorian fired off a trademark curling effort towards the far-post.

Alas, Vicente Guaita was equal to it with an athletic parry.

Waiting and ready was Gabonese striker Aubameyang, who stuck out a right boot to poke the ball home from a rather unorthodox position, requiring real skill to divert the ball home for a third goal in five Premier League games.

Arsenal struggled to build on the eighth-minute strike and Palace matched their manager’s reputation for the physical and were allowed to venture forward freely as the hosts backed off.

Benteke had a smart turn-and-shoot attempt easily saved before Aaron Ramsdale was called to stop the biggest warning sign with the last kick of the half.

Conor Gallagher’s volley from outside the box would have been a goal of the season contender, had the goalkeeper not got across to it.

Not to be outdone, Thomas Partey took aim for 30 yards early in the second-half but saw his effort curl inches wide.

Moments later, Palace grabbed the leveller with thanks to Jordan Ayew’s pressing on Partey.

The ball squirted out to Benteke and the striker broke free from Gabriel Magalhaes before driving his shot past Ramsdale.

The Eagles completed their turnaround when once again they found plenty of North London to stretch their legs into.

Gallagher and sub Michael Olise brought the ball out in a slick counter-attack for Edouard to belt home via the crossbar.

Lacazette had provided fresh impetus off the bench but Arsenal struggled to get going quick enough to catch Palace on the hop.

Kieran Tierney then thumped a shot onto the crossbar when it really should have gone in.

Yet, Lacazette was the man after a 95th-minute corner wasn’t cleared and he found a pocket of space to bury a leveller for the jubilant, and relieved, home fans