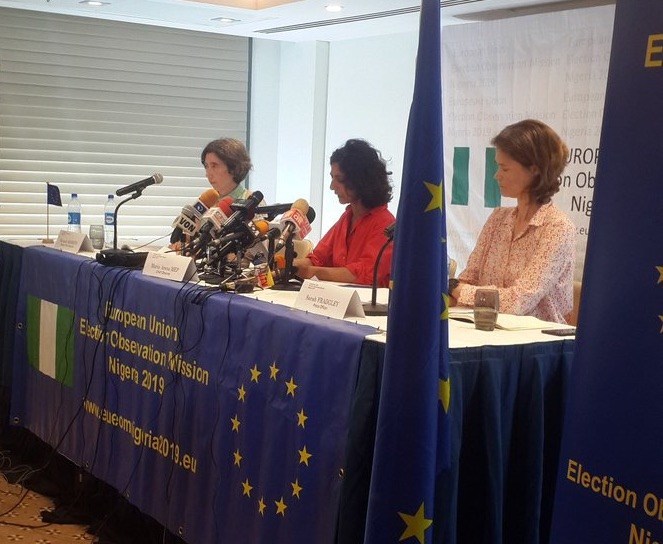 The main opposition party, Peoples Democratic Party (PDP) had claimed that an INEC server was used to transmit results of the 23 February presidential election and at the election tribunal, has obtained an order to examine the server.

INEC in its counter-affidavit at the tribunal dismissed the existence of any server, saying that results were manually collated across the country.

She said the EU EOM had 91 observers on ground for the Presidential and National Assembly elections across Nigeria.

Following its observation mission, she said the EU EOM had 30 recommendations on how to improve future electoral processes in Nigeria.

“The mission concluded that the systemic failings seen in the elections, and the relatively low levels of voter participation, show the need for fundamental electoral reform.”

The EU report prioritised seven recommendations of the 30, one of which was that Nigeria should strengthen INEC procedures for the collation of results to improve integrity and confidence in electoral outcomes.

Another recommendation was that electoral tribunals cover pre-election cases in order to improve access to remedy and to avoid petitions being taken to different courts at the same time.

However, Festus Keyamo, spokesman, All Progressives Congress (APC) Presidential Campaign Council, who addressed newsmen afterwards, faulted the EU EOM for not coming to a conclusion in its report.

“The result reflects the overall wishes of Nigerians. That was the report by so many observers. If you are an observer, you should come to a definitive conclusion. Don’t be dodgy about it, don’t run away from that fact because we have 120,000 polling units across the country and in all their report I don’t think they discussed at most 500 polling units.

“So it is not enough for you discuss the anomalies.They must discuss the overall results coming from the entire country and whether it did reflect the wishes of the people. This is what we want to know because they have problems in the US elections, there are problems in the EU and even UK elections.

“For Christ sake, we need a detailed analysis to come to a definitive conclusion about the overall result of the election,” he said