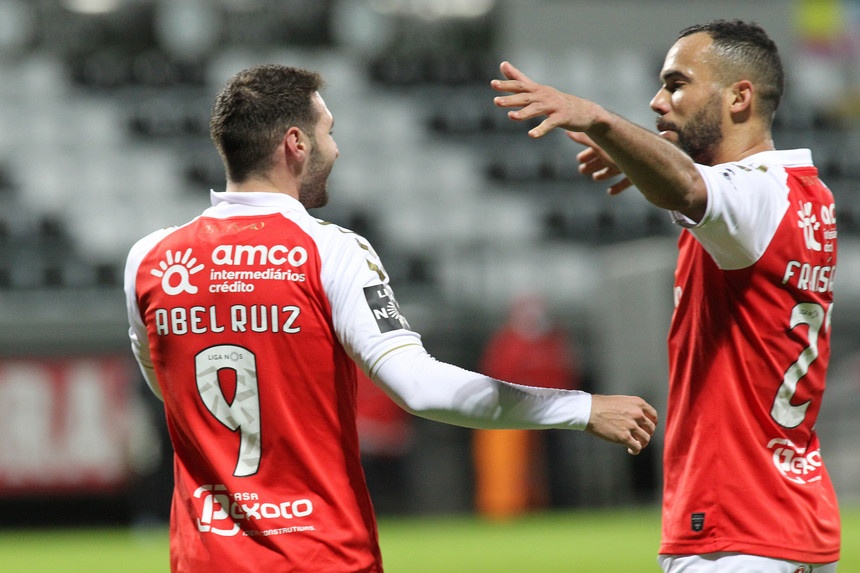 Sporting de Braga have risen up to second place after beating Nacional 2-1 in the wake of FC Porto’s 0-0 draw with Sporting while Befica recapture winning form.

The Arsenalistas registered three potentially crucial points away at the Choupana with first-half goals from Fransérgio and Abel Ruiz, in a lead that was later halved by a Brayan Riascos finish.

As Braga moved up the table, and with Paços de Ferreira also losing, Benfica cut the gap between them and Porto back down to three points after defeating Rio Ave 2-0 at home on Monday night.

It was with a clear view of second place, courtesy of Porto’s goalless draw at home to Sporting, that Braga travelled to Madeira to face Nacional at the Choupana.

From the very first minute, the visitors aimed to assert their dominance, seeing an Abel Ruiz finish blocked off the line by Rui Correia before Fransérgio, deep into the first half, made it 1-0 with a tap-in thanks to a flapping Riccardo Piscitelli.

See also  'It Was A Set Up' - Footballer, Neymar Reacts To Rape Allegations

The Nacional keeper braced himself for further embarrassment in the 29th minute after failing to deal with a long ball up the field, heading it straight into Ruiz’s path for a simple second goal.

Ruiz came close to his second on two separate occasions before half time, striking the post twice to leave Braga fans deep in thought when Riascos clawed a goal back in the 68th minute for Nacional.

The hosts continued to look second best, however, enabling the Arsenalistas to claim all three points on a reasonably comfortable Sunday night.

Following Paços de Ferreira’s 3-0 loss to Santa Clara, Benfica not only had the chance to distance themselves from fifth place, but also close in on rivals Porto, as Jorge Jesus sought to relieve some of the pressure building upon him and his under-performing squad.

Everton Cebolinha came close to placing the Eagles ahead in an eagerly-anticipated contest at home to Rio Ave, cutting in on his favoured right foot before curling an effort onto the crossbar in the 9th minute.

See also  Liverpool are Champions of Europe, down Tottenham 2-0

The Vilacondenses replied with crafty work from the left by Gelson Dala, working a yard inside the box before threatening to break the deadlock with a low shot bouncing away off the inside of the near post, 12 minutes later.

As Rio Ave ended the first half strongly, Benfica began to leave their imprint on the affair, many thanks to the visitors’ demise on the ball, with chances for Haris Seferovic and Gian-Luca Waldschmidt, all stopped by a desperate Pawel Kieszek between the sticks.

Miguel Cardoso’s men didn’t take the warnings on and conceded soon enough, as Everton poked a pass through for Seferovic to slam home inside the box on the hour-mark.

Just as Benfica started to look a little leggy, with Thursday’s defeat to Arsenal fresh in the memory, Pizzi popped up off the bench to add greater comfort to the score-line, scoring the Lisbon outfit’s second from outside the box.

A couple of goals served the hosts nicely en route to a return to winning ways – their first in the league since the 8th February, versus FC Famalicão.