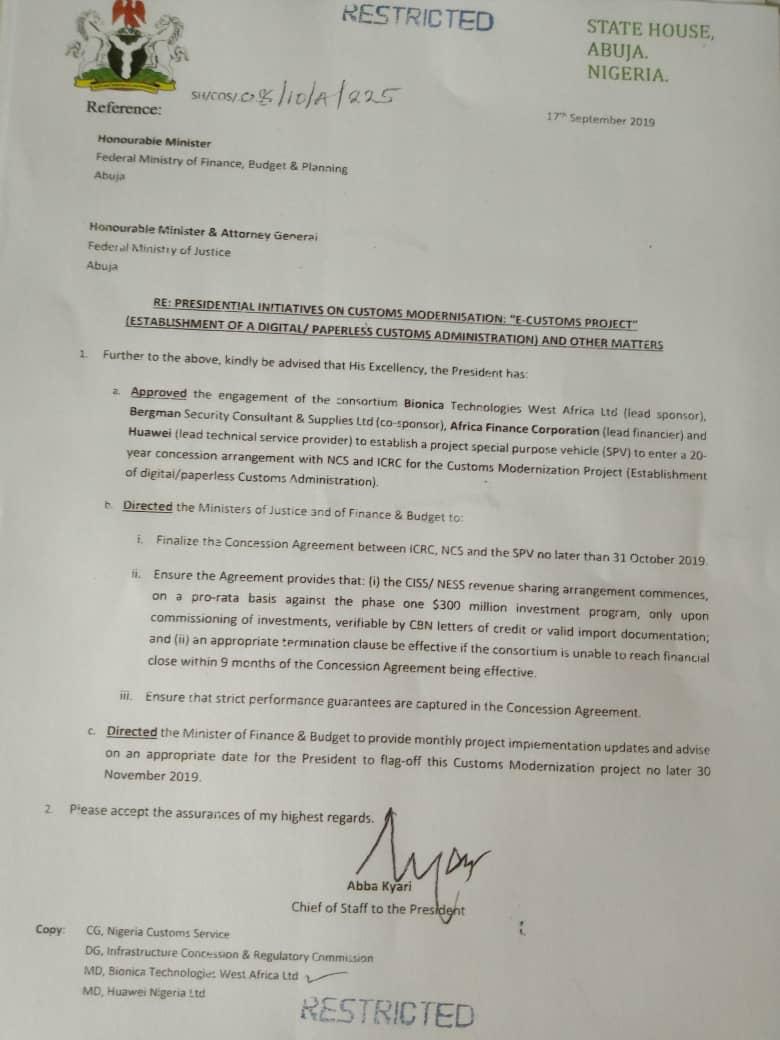 Latest documents leaked from the Federal Government indicts the Chief of Staff to the President, Abba Kyari in a brewing contract scandal that reveals his corrupt tendencies and continued use of his office for personal enrichment.

Document received by our reporter indicate that on September 17, 2019 contrary to extant procurement rules, the Chief of Staff office directed two federal ministries to engage a consortium led by a suspected front company call Bionica Technologies WA Limited that was previously known as Sanga Engineering West Africa. The consortium included Huawei China, Bergman Security and African Finance Corporation as financier. A private SPV was directed to be formed to control Nigeria’s sovereign borders as a result and the Custom was directed to comply. “BIONICA TECHNOLOGIES ” is an EU registered company with offices in Greece, Cyprus and Nigeria with shadowy relationships to the likes of Babagana Kingibe who has been fingered as a key operative with Abba Kyari in the corridors of power.

The sole owner of Bionica was listed as one Edet Afia, who was born on 6th November, 1960 and was a former NITEL engineer. He is said to have assumed leadership after the Greek Founder, George M. Logothetis died and was appointed the Chief Executive Officer (CEO) of all the companies owned, operated and ran by Late Mr. George M. Logothetis. The Logothetis family is a Greek-British family that own Concordia and Libra Group, and is deeply connected in West Africa as well as the region to security interests with shadowy ownership.

Our sources in analyzing the directive from the Chief of Staff Abba Kyari indicated that the letter addressed by him violates procurement and ethics rule of his office that requires that he can’t be involved in procurement matters which exclusively originates from user agencies. Being that the approval for the E-Border solution originated from the Ministry of Interior that obtained the Federal Executive Council approval, granted on 25th April 2019, that Ministry was naturally supposed to originate the procurement process not the Ministry of Finance, Customs (which is under Finance and not Interior) or the Ministry of Justice that also received the directive.

This is especially given Nigeria’s recent experience with P & ID and foreign entities using uncoordinated, illegal contracts to bind the nation. That experience and the inclusion of a Chinese entity, Huawei – widely banned around the world for spying on behalf of the Chinese government on foreign governments, have alarmed security and intelligence watchers who warn of dire consequences if the nation’s borders is handed over to the Chinese whose illegal miners and loggers are one of the top violators.

Our sources at the Bureau of Public Procurement indicates that at the minimum, some form of inter-agency directive or coordination between Customs and Immigration as well as Interior Ministry who have the primary duty to protect the Nation’s border was expected, and a decision on an acquisition strategy expected not a directive from the Chief of Staff’s office. This is as provided for by Part IV, Section 16 of the Procurement Act 2007, and the same provision requires open, competitive bids which the directive violated.

Increasingly, directives from Chief of Staff to the President office, sometimes claiming Presidential approval to direct which negates extant rules, have concerned watchers. Some have even cited the likelihood of forgery of the signature of the C-in-C in some instances, warning the dire consequences of the brazen actions of the notorious Chief of Staff.

Further to the issue of acquisition strategy, it must be noted that the directive of the Chief of staff’s office aside from feeling of corruption and favouritism, by solely awarding the opportunity to a consortium that did not subject itself to extant rules, also did not comply to procedure for obtaining regulatory approval for concession. For one, the FEC approval was for procurement and it will take another approval from FEC or Mr. President to concession the sovereign border of Nigeria instead of procuring systems to protect it.

Indeed, the decision to concession should have originated from the Ministry of Interior or Nigeria Customs Service, assuming Interior stepped down its approval for Customs as an agency to implement, and such would have sough no-objection from the Independent Concession Regulatory Commission (ICRC) which is supposed to be independent. The likelihood that the ICRC would have agreed to concession the entire sovereign borders of Nigeria, or do so to a single consortium under the indirect control of a foreign government was slim or next to unlikely.

The idea to concession border security to private entity including the Chinese instead of simply developing or buying the technology have alarmed the security system, pointing to a lack of understanding of how the process works. It is literally like deciding to concession the National Army or Navy; which is plain wrong. Indeed, the $300 million figure quoted in the letter from the office, has never been subjected to any valuation, bid or estimate by independent entities but indicated collusion and attempt to rip off Nigeria as has been the case under the Chief of Staff and especially since he returned to office.

This pattern of corruption, usurping agency powers and cronyism emanating from the Chief of Staff office is further proof that Abba Kyari is wielding powers beyond the scope of his office as watchers have claimed.

See also  Obasa: The Yoruba man who predicted Amotekun 4 years before its establishment

Sent from Yahoo Mail on Android

Keystone Bank in Fresh Trouble: To Pay Chinese Firm $778,118.72 Over Breach of Contract