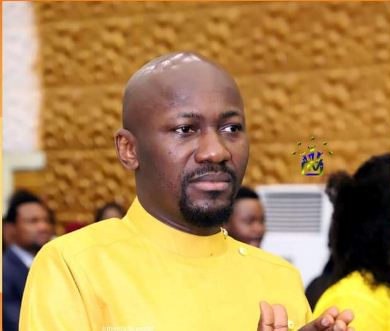 Popular servant of God and senior pastor at the Omega Fire Ministries (OFM) worldwide, Apostle Johnson Suleman, who has consistently upset the powers that be with his bold preaching and spiritual admonitions, has passed a damning verdict on the government of Muhammadu Buhari, while he professed hope for a remarkable end of the year and the incoming New Year.

Suleman, while delivering a sermon during a special December service at his ministry’s headquarters, Auchi, Edo State, declared that the government has failed on all of its electoral promises.

The statement made by the cleric suggests that the four-point agenda of the All Progressives Congress (APC) announced when it took the mantle of leadership of Nigeria has not been manifested five years after. President Buhari, while being sworn in on May 29, 2015, promised to fight corruption, insecurity, economic lull and unemployment. But Apostle Suleman says “all have failed”.

The ‘Oracle of God’, in the statement, frowned at the notion that there must be no criticism of the President, or that citizens are to stand by the President, right or wrong, noting that such a conduct is not only unpatriotic and sycophantic, but is morally treasonable.

“The four-point agenda of this government was hinged on anti-corruption, security, economy and employment. Right now, insecurity is at its peak, economy is in shambles, corruption is monumental while unemployment maximal,” Suleman stated while he described the government as “worst ever”.

While praying for a fruitful December 2020, Apostle Suleman noted that December is a special month, thereby urging the people to bless God by giving Him thanks for who He is, for His mighty works and all He has done for all.

“December will, no doubt, be a month of celebration of greater blessings, in thanksgiving to God. 12 is the number of order. I see this December and the New Year bringing order, laughter, peace, favour and opened doors for all. All our lost in the past eleven months shall be recovered massively as New Year strides in. Happiness is triggered by happenings. But Joy is sponsored by the Holy Spirit. Despite the limitations, battles of human life and failures of the leadership, I see you staying joyful,” he prays.