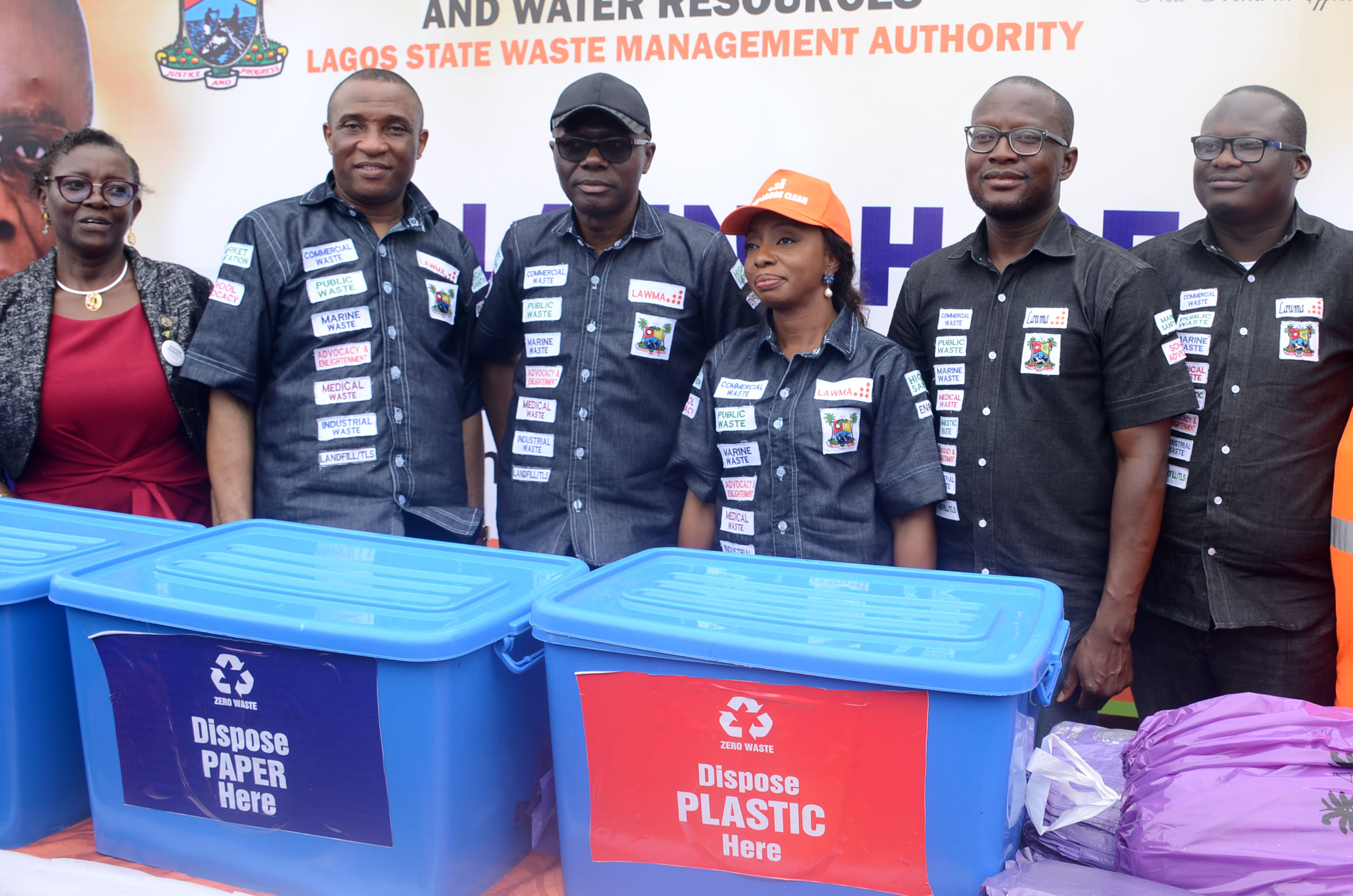 Lagos State Governor, Babajide Sanwo-Olu on Thursday launched the Blue Box Programme aimed at encouraging waste sorting in a bid to achieve the goal of a cleaner Lagos devoid of filth.

The Blue Box Programme is a single stream recyclable collection programme that will encourage separation of recyclable materials from the general waste at the point of generation.

Speaking at the event, Sanwo-Olu said with huge population, Lagos generated over 10,000 metric tonnes of waste daily, adding that the old method of waste disposal had become old-fashioned.

He said 50 percent of waste generated in the state could be recycled to generate income for the populace, as being done in several parts of the world, stressing that LAWMA was saddled with the task of driving a circular economy.

Sanwo-Olu stated that the bulk of recyclable materials harvested by scavengers were contaminated and unable to pass quality test thereby denying recyclers value for material, stressing that this was what led to the Blue Box initiative, for waste sorting and recycling.

The governor said the programme would kick-off on Saturday with two pilot schemes in Surulere and Victoria Island, as well as some designated estates in the state.

He noted further that the target of the programme was for the state to capture 50 percent of recyclable waste by 2021, as well as create green economy and income for the people.

Speaking at the event, Commissioner for the Environment and Water Resources, Mr. Tunji Bello, noted that the programme was in pursuit of the administration’s mantra of creating a cleaner Lagos, adding that in recent time, the state had witnessed a lot of degeneration in the waste management sector.

“This is further exacerbated by population explosion resulting from intense inflow of people into the state in search of greener pastures, and also due to instability in other parts of the country, particularly the northeast. One of the major challenges being faced in Lagos is our small land size in relation to our alarmingly increasing population. This has impacted negatively on the availability of space for more infrastructural developments.

“This dearth of sufficient land space has also affected adversely our waste management strategy since we are unable to get adequate land space for landfill activities to accommodate the  huge waste being generated on a daily basis estimated to have grown from 10,000 MT to 14,000MT within a period of five years,” he explained.

The commissioner said this was in addition to high water table which further limited room to manoeuver, adding that it necessitated government’s urge to rethink its strategy in waste management, bringing about waste sorting for recycling.

He stated that government’s ultimate aim was to attain waste conversion and waste buyback, turning waste into resources, which he said, would ultimately minimize waste and drastically reduce what should be transported to the landfills, and also eliminate illicit disposal through drainage systems.

“It is without doubt that today’s launch of Lagos Blue Box Programme, which involves a further modernization of our waste management system, is a move in the right direction. This is just the beginning. More are still coming on our waste management policy towards attaining our goal of a greater Lagos,” he said.

Managing Director and Chief Executive Officer of the Lagos Waste Management Authority, LAWMA, Dr. Muyiwa Gbadegesin, said residents of the the state were used to the old-fashioned style of dumping all waste in one container, for eventual evacuation to the Transfer Loading Station and/or  landfill site.

He disclosed that the governor mandated LAWMA to come up with the idea of the Blue Box Recycling Programme, that would encourage dropping trash into the appropriate boxes according to characterization, adding that the governor went a step further to facilitate production and donation of the bags being distributed.

“The Blue Box Programme is a single stream recyclable collection program that will encourage separation of recyclable materials from the general waste at the point of generation. We are all now aware that we must keep our waste in containers at home.

“Now, we are advising that we should have two containers- a black container for waste, and blue container for recyclables. To kick-off the Blue Box programme, we are distributing these color-coded recycling bags to each household through franchised recyclers for separation of recyclables. The bags would be collected on designated dates by the assigned recycler and transported to the sorting hubs within the area at designated days of the week.

“Respective recycling companies who are franchise holders, would come to pick up the boxes. Colour-coded bags will be distributed by recyclers and Environmental volunteer corps who will educate and encourage participation and also collate data on field. The collected recyclables will then be transported to the Community Recycling Centre in that area, for further sorting and sale to off-takers,” he explained.

Gbadegesin said as a way of encouraging compliance, LAWMA would promote the sorting culture with a reward system, saying that participatory households would accumulate coupons distributed by the franchisee which would be exchanged with several redeemable options, which included but not limited to reduction in amount paid for waste bills.

The LAWMA MD said the benefits of the programme included capturing about 50 percent of recyclables upstream with zero tolerance for scavenging by June 2021; attracting major investors, creating green jobs, re-orientating and re-integrating scavengers as resource managers at the Community Recycling centers.

Also speaking, wife of the governor, Dr. Ibijoke Sanwo-Olu, noted that the Blue box programme would help deepen the culture of sorting during waste generation, adding that it would enhance zero waste initiative of the government, while charging women to key into the programme as waste sorting starts from the kitchen.