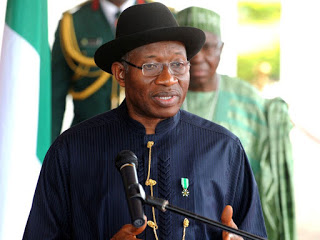 Former President, Dr. Goodluck Jonathan has paid tributes to former United States Secretary of State and chairman of the Joint Chiefs of Staff General Colin Powell who died on Monday at age of 84.

In a tribute Dr. Jonathan personally signed, he described late powell as a renowned United States public servant and great leader who left solid and indelible footprints in the sands of time.

He also stated that his stellar military career paved the way for other African Americans to reach for the top, adding that he articulated a new paradigm for engaging in military action.

The former President further stated: “ Until the election of President Barack Obama in 2008, Colin Powel was the highest ranking African American to have served in the public sector of the United States. In that capacity, he served as a beacon of hope and was a pride of the Black Race.

“His stellar military career, which saw him become the first Black Chairman of the Joint Chiefs of Staff, which pivoted him to also becoming the first US Secretary of State of colour, paved the way for other African Americans to reach for the top. His articulation of the Powell Doctrine gave the United States, and the world at large, a new paradigm for engaging in military action with honour and decorum.

See also  Covid-19 Vaccine: Thousands of Unvaccinated Americans to be Laid Off

“As Secretary of State, he was known for his tactful management of America’s foreign relations, of which he extended a right hand of fellowship to the Yar’adua administration when I was Vice President.

“His death at 84 after a long, useful and fulfilled life, is mourned by my family and I, as well as the Goodluck Jonathan Foundation. He left solid and indelible footprints in the sands of time, and would be greatly missed. Our prayers are with his family at this trying time for them.”