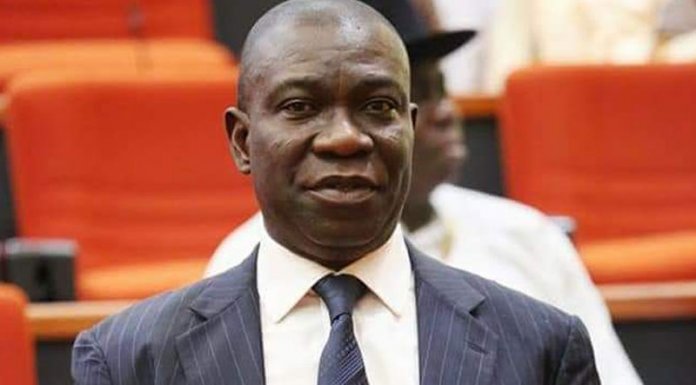 A total of 300 undergraduates from Enugu State in various universities, monotechnics and polytechnics across the country and 19 undergraduates from the 17 local government areas in the state have benefitted from scholarships and bursary awarded by Ikeoha, a foundation owned by the Deputy Senate President, Ike Ekweremadu.
While 300 of the students received 50,000 bursary each, 19 students got 400,000 each to fully fund their education from first to final year.

Speaking during the award ceremony in Enugu, Ekweremadu said the establishment of the foundation was a little way of putting smiles on the faces of citizens and giving back to the community.
“It is true that we are in difficult times, but we shall continue to make determined efforts to better the lives of our people.”
He stated that the foundation intends to take its activities to the next level by extending its hand of fellowship to the entire region, the country and Africa at large, adding that another batch of 80 students will also receive 50,000 bursary from the foundation.

Also speaking during the event, Governor Ifeanyi Ugwuanyi said Ekweremadu has yet again shown his readiness to give back to the community that chose him to represent it.
“Goodwill is the greatest asset and what Ekweremadu has done here today is a perfect example of that. Education is necessary and that is why what we are doing here today is very important,” he said.
The governor urged beneficiaries of the bursary and scholarship to make good use of the funds in their pursuit of academic excellence and also extend the same hand of fellowship when it comes to their turn.

In her remarks, the Executive Director, Ikeoha Foundation, Cindy Ezeugwu said the event is in line with Ekweremadu’s vision of philanthropy and commitment to continuously empower the people of Enugu State through initiating and carrying out laudable programmes that are intended to better the lives of the people.
“Our leader has distinguished himself in service to leadership and humanity as he has continued to build and empower indigent and vulnerable people in the society, as well as offered humanitarian services to widows and children,” she said.
Other personalities at the occasion were Senator Chukwuma Utazi, Hon. Toby Okechukwu, Prof. Uchenna Eze, members of the State House of Assembly and traditional rulers.

See also  Someone is trying to hack my Twitter account -Davido raises alarm
Related Topics:
Up Next

NB Targets More Teachers, as Maltina Teacher of the Year Kicks off