Agbaje: These are dangerous times, what Buhari should do on insecurity

“I want to rule the world” -Juju Singer, Dotun Future 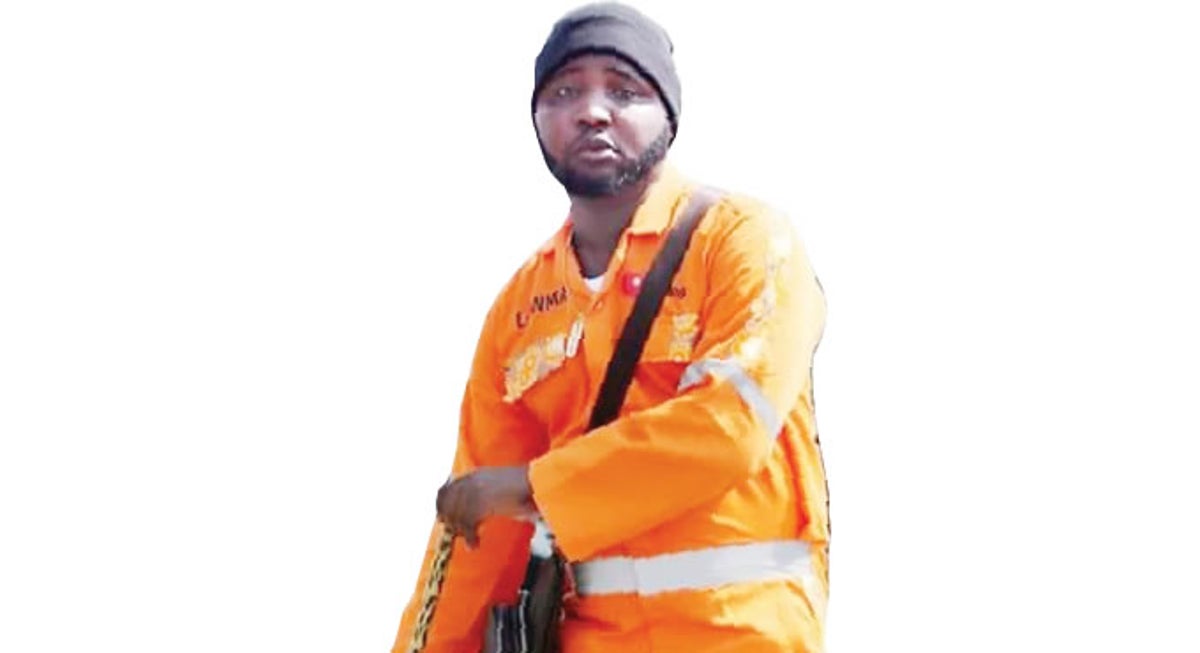 Lagos State Waste Management Authority, Olamide Suleiman, recently made a video on the plight of Lagos street sweepers, who were not paid salaries for two months. He tells SAMSON FOLARIN how his life came under threat after the video went viral

Can you share with us a little about your background?

I am Olamide Toheeb Suleiman, a LAWMA supervisor. I was born in Lagos and I am 26 years old. I did not complete my secondary school because of some personal challenges, which also affected the relationship between my mum and dad. About 18 years ago, when I was in secondary school, I was writing when something came on me and I walked out of school. I was away from home for about four to five months. My mum and dad looked for me and they could not find me. The police found me, took me to court and then social welfare. I was later released.

In 2007, while at Ikotun, I found myself naked. That was how I continued battling this mental problem. Someone once took a video of me naked and posted it on the social media, saying I was a Yahoo-Yahoo boy. That video is still online as we speak. My parents took me to herbalists, hospitals and psychiatric homes for help, all to no avail. My parents also fought and got separated because of me.

That was how I started following politicians around. I joined the campaign team of former Lagos Governor, Akinwunmi Ambode. When he won the election, he bought a tricycle for me. Because of my mental problem, I was involved in several accidents and the tricycle was wrecked. I later went to meet him and begged for a job with the Lagos State Traffic Management Authority. He referred me to the Ministry of Transportation and I was employed as a cleaner, because I had no qualification. However, my mental problem occasionally surfaced and people started gossiping about me. The government said I should go home and treat myself and they would be paying my salaries. I was grateful.

When Ambode was denied a return ticket, I joined the Babajide Sanwo-Olu campaign team. That was when I met a woman, Wuraola Williams, aka Iron Lady, who was in charge of the Sanwo-Olu Babes (a campaign group). Late last year, I went to meet her after I learnt that she was a contractor with LAWMA. I told her to assist me with a job. That was how I became a LAWMA supervisor in December 2019.

Why did you make the video that went viral on the social media?

I did not know that the video would go viral. As a background, we always receive our salaries as and when due. Sweepers collect N25,000, while supervisors get N40,000. However, in April, we got nothing. Then May, nothing. Some of the people I supervise started mounting pressure on me. I told them that I did not know what was happening. I decided to meet other sweepers and supervisors under another contractor to ask if they had been paid and they said no, that they were also being owed for two months. I called my boss, Iron Lady, and asked her what was going on. She just said LAWMA was to blame and angrily disconnected the call.

One day, I saw one of the elderly women under me begging for money from a passerby and the person gave her N50. I was sad. I asked the woman why she begged for money. People challenged me that I was their supervisor and I should fight for them to be paid.

Chief Imam’s son kills friend over phone in Lagos
I went back to meet my boss, Iron Lady, who is based on Lagos Island. I asked what was going on and she said the LAWMA MD was responsible for the delay. She did not mention any name. She said he went to all the zones to verify the number of workers on duty and found just a few and he had compiled a list of five people, who would be paid. I was shocked. Out of 33 workers on my route, how could he say he wanted to pay just five?

The next day, I went to work and tried to calm my co-workers. That day, something strange happened to me. I collapsed and started gasping for breath because of my asthma. They checked my pocket and found an empty inhaler. The hungry street sweepers contributed money, went to a pharmacy and bought an inhaler for me. Everybody was crying. When I got home, I thought I had to take drastic steps to get our salaries paid. I thought I would do a video and post it on my Facebook page so that people would help us beg the LAWMA MD. I was the one who went online to find his name and copy his photo. I edited the video myself and posted it on Facebook without tagging anybody.

So, what happened after you posted it?

I posted it on Friday, June 12, 2020. A few hours after, somebody called me and asked for permission to repost the video on her Facebook wall and I consented. She asked for my account number so she could send me money to buy an inhaler. About 30 minutes later, I started getting calls from different people from all over the world – the United Kingdom, Canada, USA. I was in disbelief. Before I knew it, people invaded my Facebook page and started commenting. I never knew it would go viral. Maybe if I knew, I would not have posted it. But I have the right to post the video, because I did the right thing. If I went to steal, nobody will listen to my excuses. If I die in silence, nobody will say anything and even God will blame me for not talking. I used to beg for money, but now I have a job and I should not be begging again.

There were reports that your video was sponsored to stop the ongoing audit of LAWMA accounts, hence you kept calling out the new Managing Director, Ibrahim Odumboni, who had only worked for two weeks as of then. Is this true?

Some people also said Iron Lady paid me N250,000 to make the video and some said the opposition party was using me to spoil the good work of Governor Babajide Sanwo-Olu. These are big lies. My condition and the suffering of the widows and elderly women working as street sweepers made me do it. They should put the blame on my head and not on anybody else.

It was after the video went viral that I realised that I made a mistake about the LAWMA MD. I thought that he had been the LAWMA MD for a long time. Later, I got information that he had not even spent up to two to three weeks. I never knew.

Is it true that you received threats over the video?

Yes. While people were calling me to offer support, somebody called me with a hidden number. The caller, while speaking in Yoruba, said, ‘Olamide, you are the rave of the moment now. You are all over the social media. They have paid for your life’. I asked who the caller was and he said, ‘Bourdillon Boys’. I quickly disconnected the call. Immediately, I fled the house, where I was staying. For four days, I could not sleep. I was restless.

Who are Bourdillon Boys?

Bourdillon Boys are the people, who loiter around the house of Asiwaju Bola Tinubu in Ikoyi. They beg for money from politicians visiting the Asiwaju. They share the money among themselves. I used to be part of them. I left the group when I discovered that they cheated me whenever we got money. I decided to become a one-man squad and collect my money myself.

After I received the threat, I made a video that Bourdillion Boys were after me and I posted it on my page. That video also went viral. Iron Lady challenged them during a meeting at her house over the threat and they denied it.

What responses have you got so far from the Lagos State Government since your video went viral?

Three days after I did the video, I got a call from the Ministry of Transportation and I was queried. They were angry with me and I cried. They stopped the salary I was collecting from the ministry. They checked my records and discovered that the Ojora of Ijora land stood as my next of kin. The king, who has been my benefactor since I started having the mental challenge, was not happy when they called him. He said I would have to leave the apartment he gave me in his house, because what I did was a big disgrace to him and the Ojora family, which everybody has identified me with. He said he would, however, give me money to get another apartment.

What are your plans now?

When people were sending me money, I tried to share about N100,000 with other street sweepers, who had not collected their salaries that time. As I got the money, I also shared it. A company supplying inhalers, last Monday, came and gave me 10 packs of inhaler and 10 packs of Ventolin free of charge. I have decided to give away some of the inhalers to other asthmatic patients. All they need to do is to send me their addresses through WhatsApp and I will ask a delivery man to send it to them free of charge.

And those who want to support me should not send money; they should just send me inhalers. There are many asthmatic patients who don’t have money. They need help as well.

What are your thoughts on the elderly women and widows working as street sweepers?

Honestly, what those people need is social welfare. Most of them have four to five kids. They are suffering. The truth is, they are the ones working. They pack human and animal wastes. What we do as supervisors is just to monitor them. These are the people doing the work and they deserve better pay. We also need health insurance and financial support.