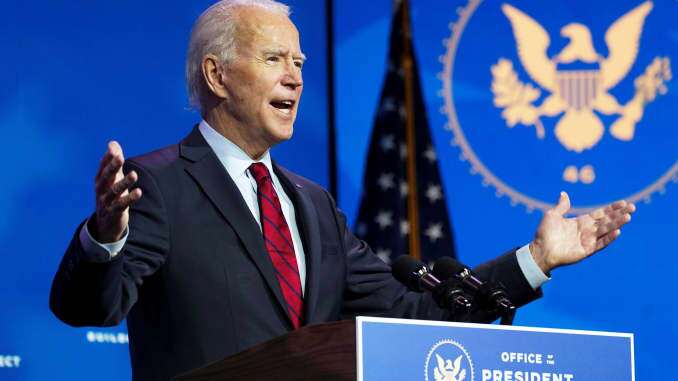 For all Trump’s unsupported claims of fraud, there was little suspense and no change as all the electoral votes allocated to Biden and the president in last month’s popular vote went officially to each man.

Biden handily beat Trump, who had 232 electoral votes. The Democrat had topped the incumbent Republican by more than 7 million in the popular vote nationwide.

“In this battle for the soul of America, democracy prevailed,” Biden said as he addressed the nation. “We the people voted. Faith in our institutions held. The integrity of our elections remains intact. And so, now it is time to turn the page. To unite. To heal.”

In each presidential election, there are 538 electoral votes up for grabs. A candidate must get a simple majority – 270 votes – in order to win the presidency.

The results will be sent to Washington and tallied in a Jan. 6 joint session of Congress over which Vice President Mike Pence will preside.

The Electoral College vote is normally a fairly procedural step in the presidential election, but its importance is heightened this year because Trump is refusing to concede his loss. He and his allies have filed roughly 50 lawsuits and most have been dropped or dismissed by judges, including twice by the U.S. Supreme Court.

Biden addressed the nation following the Electoral College’s vote, speaking to the president’s continued insistence that he won the election, saying that “not even … an abuse of power” can stop a peaceful transition of power in the United States.

“The flame of democracy was lit in this nation a long time ago,” Biden said. “And we now know that nothing – not even a pandemic, or an abuse of power – can extinguish that flame.”

“Our constitution and the will of the American people prevailed. Our democracy – pushed, tested, threatened – proved to be resilient, true and strong,” Biden said.

The president-elect even noted that he won by nearly the same margin that Trump did in 2016: “By his own standards, they numbers represented a clear victory then, and I respectfully suggest they do so now.”

Biden condemned attacks on election officials and workers. “It is my sincere hope we never again see anyone subjected to the kind of threats and abuse we saw in this election,” Biden said. “It’s simply unconscionable. We owe these public servants a debt of gratitude.”

“Our democracy survived because of them,” he added.

“I know the task before us won’t be easy,” the president-elect added, noting the difficulty the coronavirus pandemic has caused. “It’s tempered by the pain so many of us are felling. Today, our nation passed a grim milestone: 300,000 deaths due to this COVID virus. My heart goes out to each of you in this dark winter of the pandemic.”

There was no concession from the White House, where Trump has continued to make unsupported allegations of fraud.

Trump remained in the Oval Office long after the sun set in Washington, calling allies and fellow Republicans while keeping track of the running Electoral College tally, according to White House and campaign aides. The president frequently ducked into the private dining room off the Oval Office to watch on TV, complaining that the cable networks were treating it like a mini-Election Night while not giving his challenges any airtime.

The president had grown increasingly disappointed with the size of “Stop the Steal” rallies across the nation as well as efforts for the GOP to field its own slates of electors in states. A presidential wish for a fierce administration defense led to TV appearances early Monday by Stephen Miller, one of his most ferocious advocates, to try to downplay the importance of the Electoral College vote and suggest that Trump’s legal challenges would continue all the way to Inauguration Day on Jan. 20.

Late in the day, he took to Twitter to announce that Attorney General William Barr was leaving the administration before Christmas. Barr’s departure comes amid lingering tension over Trump’s unsupported fraud claims, especially after Barr’s statement this month to The Associated Press that the election results were unaffected by any fraud.

In a Fox News interview taped over the weekend, Trump said that “I worry about the country having an illegitimate president, that’s what I worry about. A president that lost and lost badly.”

On Monday in Arizona, Georgia, Michigan, Nevada, Pennsylvania and Wisconsin — the six battleground states that Biden won and Trump contested — electors gave Biden and Vice President-elect Kamala Harris their votes in low-key proceedings. Nevada’s electors met via Zoom because of the coronavirus pandemic.

Trump’s efforts to undermine the election results also led to concerns about safety for the electors, virtually unheard of in previous years. In Michigan, lawmakers from both parties reported receiving threats, and legislative offices were closed over threats of violence. Biden won the state by 154,000 votes, or 2.8 percentage points, over Trump.

The Associated Press contributed to this update.

Tems Refused to Eat as Omah Lay Appear in Court