Encounter with Oluwo of Iwo: A Quintessential Monarch by Yinka Rahman
Advertisement 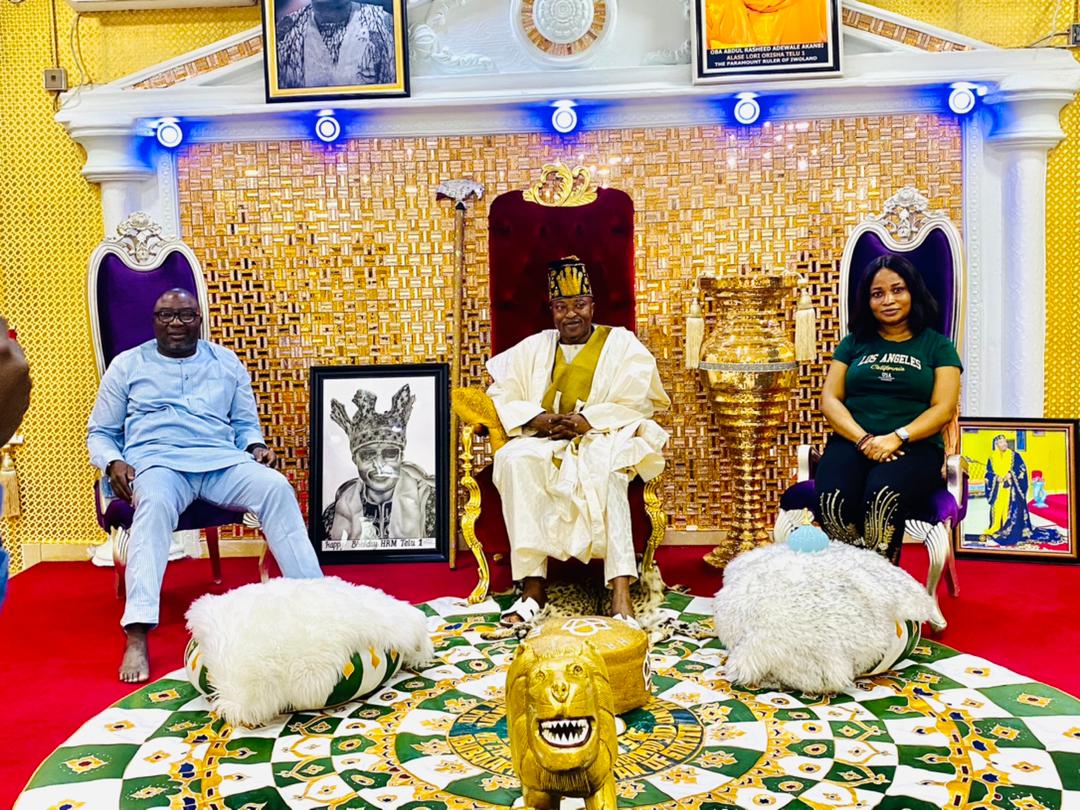 The present day Iwo city which was formerly part of the old Oyo state that was separated and later became one of the major townships in Osun state, Nigeria cannot be undermined when mentioning names of towns in Nigeria and west Africa as a whole. Like all other people of Yoruba origin, the Iwo people are said to have belonged to ile-ife, a place they migrated from in the 14th century.

Always spotted with a charming smile, the one he wore today during my visit that gave me the confidence to accept the offer of being served breakfast which he regarded as “a continental dish”.

Moving forward, Oba Abdulrasheed is one with a great knack of hospitality to all and sundry in his town (No segregation for visitors). This is also evident among the populace of the ancient town as the aboriginals are always enthusiastic to make visitors relax and feel at home whenever they are in town hence it is no surprise that a lot of visitors are always eager to visit the palace not just to pay homage to the king but also witness his hospitality.

It is no news that the stylish king transformed Iwo palace, which was hitherto a mere abode for his predecessors into a mouth-gaping edifice with numerous colours to give it a one-of-a-kind look in which every indigene of the town would be well proud of.

Stepping into the palace with an eminent son of the town, the person of Mr. TUNDE Rahman, Media Aide to Asiwaju Bola Tinubu, Oba Akanbi welcomed us with the warmest of hearts, more like he had a premonition of our visit.

A lot was discussed as he talked freely with everyone which is quite admirable for someone of his calibre.

It is worthy to note that before his Ascension on the throne, Oba Abdulrasheed Akanbi is not one that got his high ranking personality through honorary means but rather worked hard for it. After completing his primary school in Omolewa Nursery and Primary school, Oritamefa,Ibadan he proceeded to Iwo Grammer school, Araromi Iwo Osun state and later Oba Akinyele memorial high school,Idi-Ape,Ibadan. Before getting a OND in Mass communication from Ibadan polytechnic and then furthering in Canada where he got more degrees in different disciplines during the course of his career that are too numerous to mention.

Asides the points discussed above, Oba Akanbi never fails to demonstrate his love for one Nigeria as he has on numerous occasions called Agitators of the new movement (Yoruba Nation) into order and even went as far as pleading with the Federal Government to temper justice with mercy over Chief Sunday Adeyemo (Aka Sunday Igboho)’s ongoing travails with the government of the day.

Indeed words aren’t quite enough to describe the loving/warm nature of this great monarch from the ancient city, it is only the eyes that see it that can truly tell the full story, a visit to the town would surely leave one drooling for more.

Discussing about the issue of the Fulani herdsmen, he vehemently disagreed with the idea of staging war against the Fulanis. That not all Fulanis are bad because they have been living with us from time immemorial and no such atrocities had ever been recorded. He therefore suggested that, the good ones could be used to fight the bad ones as only them know the nooks and crannies of the forest which they reside.

See also  His Agenda Is SIMPLE, His Promises Are Realistic   By Stanley Chiamaka

It was a time well spent. I didn’t really want to go but the bull must definitely be taken by the horn. Lest I forget, the visit ended with a photoshoot session.