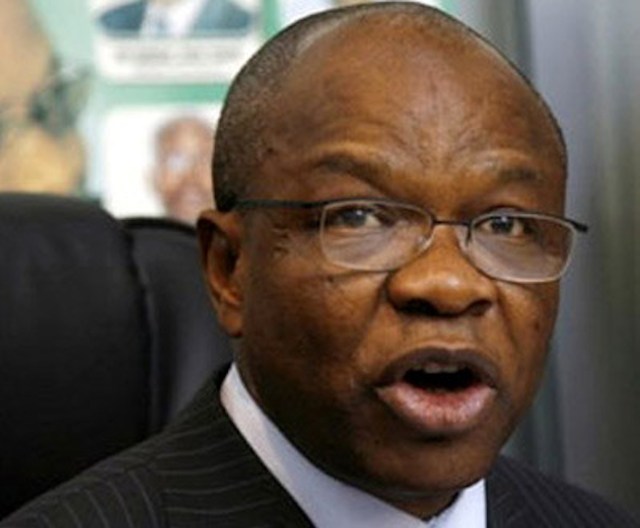 Justice Chuka Obiozor of the Federal High Court sitting in Ikoyi, Lagos, on Friday, August 9, 2019 granted bail to Prof. Maurice Iwu, a former Chairman of the Independent Electoral Commission, INEC, in the sum of N1bn (One Billion Naira) only.
Iwu was arraigned on Thursday, August 9, 2019 by the Economic and Financial Crimes Commission, EFCC, on a four-count charge bordering on money laundering to the tune of N1, 2013,000,000 (One Billion, Two Hundred and Three Million Naira).
One of the counts reads: “ That you, Prof. Maurice MMaduakolam Iwu,  between December 2014 and March 27, 2015, in Nigeria within the jurisdiction of this honourable court aided the concealment of the total sum of N1, 203,00,000.00( One Billion, Two Hundred and Three Million Naira) in Bioresources Institute of Nigeria, BION, Limited’s Account No. 1018603119 domiciled in the United Bank for Africa Plc, which sum you reasonably ought to have known forms part of proceeds of unlawful act to wit: fraud and you thereby committed an offence contrary to Sections 18(a), 15(2) (a) of the Money Laundering Prohibition Act, 2011 as amended and punishable under Section 15 ( 3) of the same Act.”
The defendant pleaded not guilty to the charge preferred against him.
During the proceedings on Thursday, August 8, 2019, Iwu’s lawyer, Ahmed Raji, SAN, informed the court of a pending application for bail on behalf of his client.
However, the prosecution counsel, Rotimi Oyedepo, in his response, told the court the he received the bail application in court yesterday and would, therefore, need some time to respond.
Consequently, Justice Obizor, after listening to both parties, adjourned to Friday, August 9, 2019(today) for hearing of the bail application and also ordered the defendant to be remanded in the EFCC Custody.