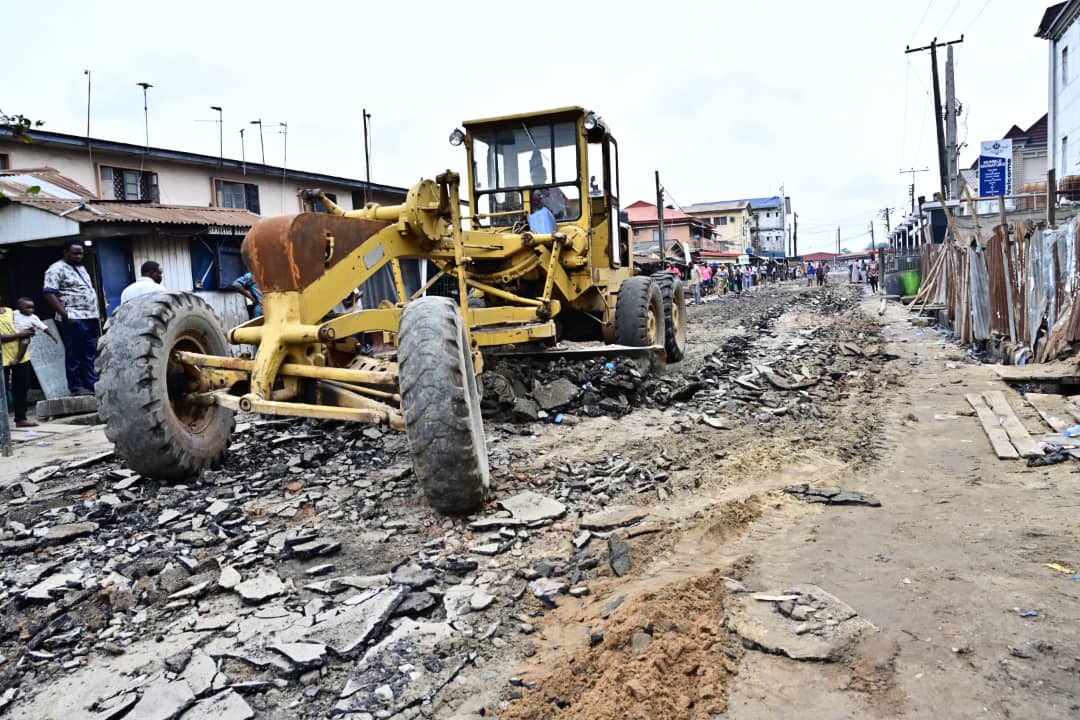 In fulfilment of his campaign promises of rehabilitating 20 roads within first 100 days of assumption of office, the Executive Chairman of Oshodi-Isolo local government , Otunba Kehinde Almoroof Oloyede has commenced rehabilitation works on Akinniku Street, Oshodi Lagos.

The council boss assured that the rehabilitation works on the promised roads will be completed within his first 100 days in office.

Residents of Akinniku have poured out their heartfelt appreciation to the council helmsman for resurfacing their road.

Jaiyeola said the road when completed will help boost economic activities of the area, considering its proximity to the Oshodi main market and the Nigeria Army Shoppong Arena and it is also a linking road to the Agege Motor Road.

Speaking on the road rehabilitation, chairman of the All Progressives Congress (APC), Oshodi-Isolo local government, Hon Saheed Animashaun said, said it was a dream come through for the residents Akinniku, a street that hosts the party’s secretariat.

He said; “we give thanks to the chairman, he is a man that fulfils all he says, as he promised us during the electioneering campaign to fix the road before 100 days in office, and this is what is happening today, in less than 2 months in office, he has commenced work on the road. I give kudos to him.”

Animashaun appealed to members of community to take ownership of the road once completed by maintaining it regularly.

One of the landlords of the street, Mr Samuel said the road was in a terrible state that used to be flooded whenever it rains.

He said; “this road was in a terrible state, whenever it rains, houses got flooded and children cant go out to play, we thank Oloyede for coming to our aide as he promised during the campaign when he visited the street.”

Another resident, Okoli Ekenechukwu whose business is on the street could not hide his joyful feelings as he said, since about five years of his been on the street, his business has not been moving fine due to the bad state of the road.

“I have never seen any tractor working on this road, since I have been here, my business is located here, the road has been terrible, it has been a challenge for us driving in and out of this place, it will be of great benefit to us as residents and our businesses,” he said.

Information gathered also has it that, ten of the roads already awarded, two contractors have moved and four other contractors will move to site latest tomorrow, Monday morning, while the four that are yet to move will pick their letters of award in the week and subsequently move to site.

The projects are scattered across all the seven wards of the local government, and a total of twenty borehole already awarded and contractors working there.

All the projects are going to be commissioned to commemorate Otunba Oloyede’s one hundred days in office.

The contractor handling the project Akinniku streeet’s rehabilitation, Eng Kingsley Steve, Managing Director of X- Unlimited Resources, said the road which will be graded with interlocks will be completed within five weeks.