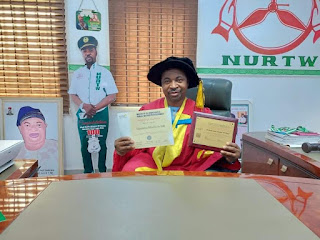 It would be recalled that the ICPSP has on Thursday, conferred on Alhaji Akinsanya, honorary member of the institute with a promise to make the induction ceremony of he and others next year in London.

Kendoo while congratulating MC Oluomo, noted that the recognition and conferrement on Mc-Oluomo honorary member of the institute further lay credence to his role in reposiotioning and rebranding the public transport sector in Lagos state and Nigeria as a whole.

He said; “I received the pleasant news of the conferrement of Honorary Membership award on my brother, Alhaji Musiliu Akinsanya, with joy and happiness. He has been consistent and persistent in his pursuit of greatness and I am happy his efforts, particularly towards the welfare of his members and his aim at removing the bad-eggs amongst them has been identified by independent body”.

He continues “I equally want to appreciate the management of the institute for finding him worthy of being inducted as an Honorary Member. It further buttress the ‘can do spirit’ of an Oshodi-born. The desire and zeal to always want to succeed regardless of ones background is what Mc-Oluomo has just exemplified and I wish him more heights.”