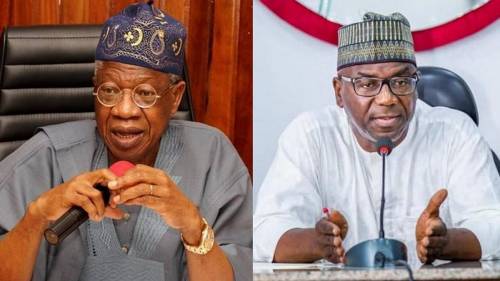 Kwara State governor, AbdulRahman AbdulRazaq has accused the Minister of Information and Culture, Lai Mohammed, of pocketing funds donated for his campaign during the 2019 governorship elections in the State.

The two are members of the All Progressives Congress (APC) but have maintained a very public feud since the party won the Kwara governorship election in 2019.

In a recent interview with ThisDay, the governor said one of his issues with the minister is how he allegedly mismanaged his campaign funds.

He accused the minister of failing to account for numerous donations made to the party’s campaign in Kwara.

He equally accused the Minister of collecting N32 million from the funds raised for the House of Representatives by-election before the governorship poll.

Governor AbdulRazaq particularly noted that the sum of N100 million donated to his campaign through Mohammed by a businessman was never accounted for by the minister.

He said: “There’s a businessman from the South-east. His banker came to me and said his Oga wants to speak with me.

“I spoke with him and he said he was sending money to me. I said, thank you very much.

“After the election, he called me to congratulate me. When he saw I was just saying ‘Thank you’, then he asked if Lai didn’t deliver the money, I asked him what money? He said N100 million. I said, no, but thank you.

“It’s not just that case. I have many on my phone. So many on the phone that they’ve sent money Lai collected it.”

“I got to one governor’s meeting. They said I’m not grateful that they did this and that for me. I didn’t see anything. Everything that was donated, Lai Mohammed did not declare to the party, or to me. Some were direct donations to me.

Mohammed months ago accused AbdulRazaq of biting the fingers that fed him, claiming that he raised the funds that bankrolled the governor’s campaign and other elections in Kwara in 2019.

The two factions worked together in 2019 to defeat former Senate President Bukola Saraki and take over most of the state and federal elective positions in Kwara.

Facebook Notice for EU! You need to login to view and post FB Comments!
Related Topics:Lai Mohammed
Up Next

Covid-19 Vaccine: Thousands of Unvaccinated Americans to be Laid Off