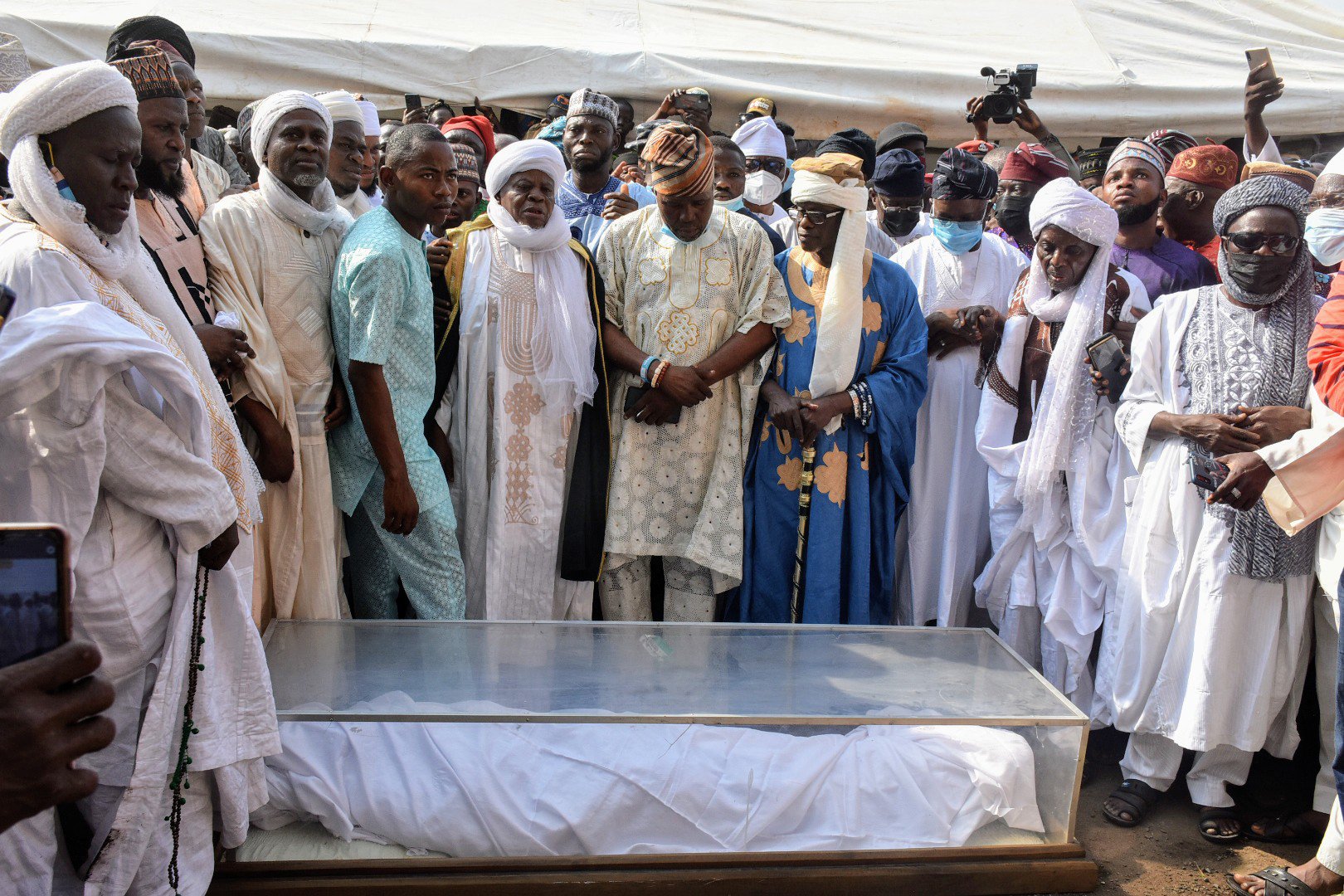 The Chief Imam of Ibadanland, Sheik Abdulganiy Abubakar, led other Islamic clerics to offer prayers for the soul of the late Oba at Mapo Hall, Ibadan.

Remains of the 93-year-old traditional ruler were later interred at his Popoyemoja Palace on Sunday evening according Islamic rites.

Among other dignitaries that attended the ceremony were Prince Oluyemisi Adeaga, the President-General, Central Council of Ibadan Indigenes (CCII), political office holders and hosts of others.

The late Oba Adetunji, the 41st Olubadan of Ibadanland, died at the University College Hospital (UCH), Ibadan, in the early hours of Sunday during an illness.

Speaking with newsmen on the death of his father, Prince Mukaila Adetunji, said that late Oba Adetunji lived a fulfilled life and was kind to everyone he came across during his lifetime.

“I do not feel anyhow over his death, because Baba did his best for the citizens and visitors. He related well with traders, artisans and even, the professionals.

“He was humble and good to everyone. If not for wealth and position, there are several people who died today.

“We thank God that Baba died in the hands of his children in peace. May Almighty God forgive his shortcomings,’’ he said.

Also, another son of the late oba, Prince Lukumon Adetunji, said: “It has happened and we have taken it in good faith.

“He was very social. He did well for family, indigenes and visitors. I pray that God grant him eternal rest and protect all that he left behind.’’

Recounting how the late traditional ruler took ill, Mr Adeola Oloko, the Personal Assistant to the late Oba Adetunji, said that he died at the University College Hospital (UCH), Ibadan, within a couple of days.

Oloko said: “He fell ill, he was in the hospital and he died in the early hours of this morning at the University College Hospital.

“He was once in a private hospital before he was moved to the University College Hospital at Orita-Mefa.

“So, nothing was kept away from the media.’’

He described his late principal as a peace-loving traditional ruler, whom he said lived for peace, harmony and the progress of Ibadan.

“If you have a domain comprising 21 towns, one city, 1,681 villages, 11 local government councils out of possibly 33, which is 60 per cent of total population of Oyo State, what are you going to live or for,’’ he said.

See also  How Long - Big Question by The Ras General

“We give glory to Almighty God. From God we come and to God we return. Baba Olubadan came, he saw and he conquered, he became the Olubadan.

“You know what it means to toe the line and rise to the point of being Olubadan of Ibadan. He had a marvelous time.

“He had beautiful reign in fulfilment of the glory of God and the good people of Ibadanland,‘’ Ayinde said.

The musician, popularly known as KWAM 1, thanked the good people of Ibadanland for the privilege given to their late father, Oba Adetunji to serve them.