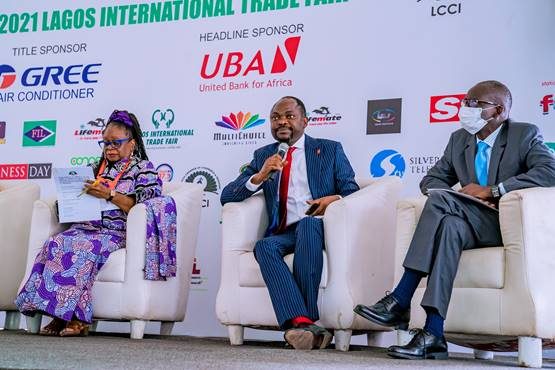 The Lagos Chamber of Commerce and Industry (LCCI) has commended Africa’s global bank, United Bank for Africa (UBA) for its contribution to infrastructure development and growth of trade in the 19 countries where it operates, which is why the bank remains its preferred partner for the Lagos International  Trade Fair (LITF).

The President, LCCI, Mrs. Toki Mabogunje, said this while delivering a  welcome address  with the theme: ‘Boosting Intra Africa Trade ’during the Africa day celebration, held at the ongoing  35th edition of the Fair in Lagos.

She explained that the Africa Day was implemented because of the African Continental Free Trade Area (AfCFTA) agreement which is a long term dream and a long term goal, adding that; “To this end we have started taking first steps and are doing a lot of sensitization and awareness especially for the MSMEs.”

Mabogunje who took time to appreciate UBA’s efforts as headline sponsor, appreciated the bank’s consistency and support rendered to SMEs through making available windows of opportunities for businesses to thrive during and after the Fair.

She said, “Partnering with UBA is significant because it is an organisation that has its footprint in 20 countries and that is a big feat, it is not easy to achieve that. As Partners we are thinking in the same way and working together. UBA is also making it possible for us to successfully deliver LITF to the Nigerian and international public, and based on this fact we are profoundly appreciative and satisfied that we have a competent partner.”

UBA’s Head, Commercial & Corporate Banking, Muyiwa Akinyemi, while speaking at the event, said UBA realises that SMEs are the fulcrum of growth in any economy and is therefore dedicated to helping them thrive.

Akinyemi noted that boosting Intra-Africa trade is pertinent if Africa must truly attain self-reliance and economic development, adding that Africa and indeed Africans, must own the narrative for the economic emancipation of the continent.”

Akinyemi said, “The Theme of this year’s event resonates with our mission to create value for our stakeholders by supporting businesses across Africa, which led to our rapid expansion from Ghana in 2005 to 18 other locations in Africa within a space of five years. AfCTA is a transformational journey that we must all embrace and encourage, because it presents us with opportunities that will lead to creating a market of over 1.2 billion people with a combined GDP of over $3.4 trillion. Hence the possibilities of growth and prosperity on the continent are endless.”

The Chairman, Trade Promotion Board of the LCCI, Gabriel Idahosa, agreed with the possibilities that AfCTA presents and said it was one worthy of committing too. He also applauded UBA and the LCCI President as well as all members of the Executive Committee and Council for the tremendous support given which has been instrumental to the success of the fair thus far