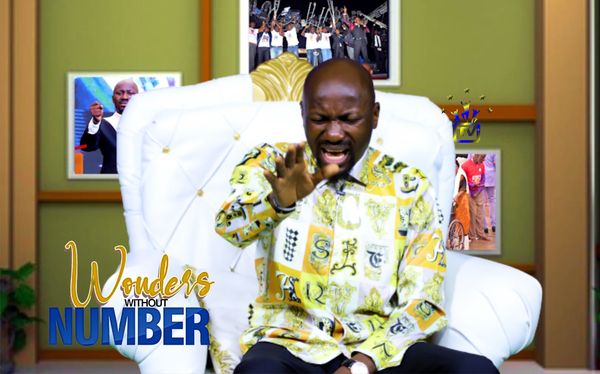 Every time you tell your story of how you met God, it is a testimony and it shows that you give honour and glory to Him, and He is pleased with that.

At the ongoing monthly powerful prophetic programme by the servant of God and senior pastor at the Omega Fire Ministries (OFM) worldwide, Apostle Johnson Suleman, it is testimonies galore. People are telling spectacular stories about their encounters with God at the programme tagged ‘Wonders Without Numbers’.

Over 400 participants, so far, have relayed their accounts of how God rescued them both from financial wrecks, health hazards and other life-threatening challenges; an encounter that they declared has changed their life for the better. More significant, is that their stories are beginning to help others to know what God is like and what He can do.

A Kenyan lady named Betty, who has been following the programme for three months, gave her testimony in public that, in less than seven hours that he followed Apostle Suleman’s prophetic words, a Copenhagen based lady, who had discussed partnership with her in a multi-million business, called for the preparations. Likewise, Chiza Chinyere Anwuacha from Nigeria, said “I have been applying for jobs since November 2020 without a positive reply. After listening to Papa Suleman, I got an email by 8.40 am scheduling me for an interview with the chairman of the company the next day. My time has come.”

From the United Kingdom, Marylene affirmed God’s wonders. She said that after watching the April edition of ‘Wonders Without Numbers’, where Apostle Suleman declared in a prayer that a child’s broken legs were being healed, the doctor told her that her baby in the womb that had club feet was now having normal chromosomes, with no sign of autism.

John, from Ebonyi State, said he was present when the servant of God mentioned the case of someone with a bone cyst (a hole in the bone), which at his left hip had affected his spine and made it difficult for him to walk fine. But after the Apostle prayed, John declared that the pains left miraculously.

The case of Bright, from the Netherlands, was an interesting one. Bright worked for a company early this year and he was sacked, without pay! He said he was not paid because he did not have a residence permit. But a few hours after he watched Apostle Suleman pray, he received an email from the company which indicated that he had been paid the sum of €980 (nine hundred and eighty Euro)! Gertrude, from Kenya was giving glory to God for having the opportunity to connect with Apostle Suleman during the programme. She admitted that she had entered early menopause for two years now and the doctor told her she could not bear a child. After connecting to ‘Wonders Without Numbers’, her menstrual flow returned. And she declared: “I am now trusting God for a baby.” Eunice, from Italy, said: “I want to testify the goodness of God in my family. Sir, you were praying for promotion and I connected your prayer to my husband and he was promoted in his place of work. God also delivered our baby from constant uncontrollable crying, just as you mentioned in the prayer.”

“I have been having serious pains under my feet and I found it hard to walk properly but after the prayer from you, I stopped feeling any pain. Also, the Immigration blocked my documents but I got an email yesterday that I should come and collect my documents. God is, indeed, marvelous,” Harriet, from France, declared. For Susan, from Lagos, Nigeria, connecting to the programme on a Saturday morning was her luckiest decision in months. She testified that as Apostle Suleman prayed, she heard him mention a case of multiple fibroids, which she confessed was her lot at the time. But after the prayers, she could not feel it any more. She found out that she had been healed.

A Lagos based Pastor Chuks Imoh said in his testimony that, sometimes in 2020, he withdrew some money from his Pension Account. But to his surprise, he got an alert of over half a million added to his Current balance. “Indeed, it was dumbfounding,” he declared, adding that, “truly God does wonders without numbers.” A Nigerian lady resident in Dallas Texas, Mary Obaidiku, said, “I have been diagnosed with a strange illness for over eight years and my period had been inconsistent. I kept putting my hands on my lower abdomen whenever you prayed and behold, I saw my period one of the days after listening to you praying.”

During the prophetic declarations, Hendrix from Spain said he heard Apostle Suleman mentioned that documents and visas were being released. He said he had earlier solicited a UK VISA for his kids more than a month before without success. However, after the prayers by the servant of God, his children’s application was granted and their passports were returned with visas.

As the programme progresses, many are still giving their testimonies, experiencing an incredible move of God. As Apostle Suleman prays, the power of God comes down in a tangible way, with a lot more receiving deliverance from demons and lives restored.

Related Topics:Apostle Suleman
Up Next