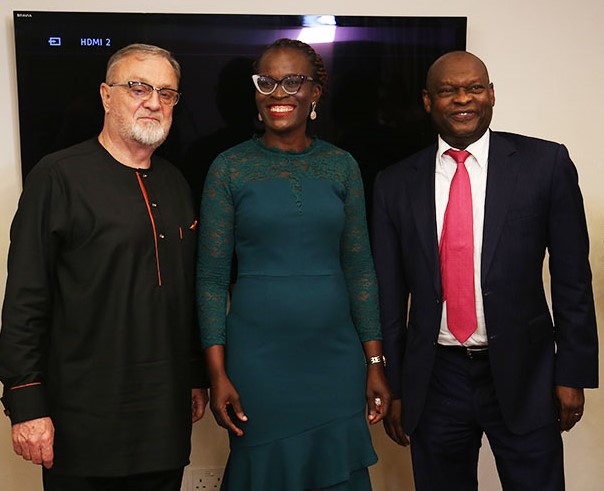 Presenting their tasks, themed, “Show Your Innovation,” during a boardroom session, eight (8) of the contestants were expected to create compelling video advert for octiplus and its prime product awareness.

However, at the end of the Heritage Bank’s second task, the participated housemates successfully identified the non-vanilla features of the digital app which were that personal investment savings could be done with the app as well as group savings usually known as “esusu.” Aside the regular features that were known by all including Payment features, buying of airtime, pay bills, flight bookings, movie tickets and one of the most interesting features that was mentioned, was that with Octiplus, you can add all your debit cards from other financial institutions to this App and enjoy easy banking, easy life.

Nsikak Ifet, Head, Content and Digital, Heritage Bank Plc; Kyari Bukar and Chris Parkes, judges of The Next Titan, during the board room judging session of the Heritage Bank’s 2nd task to housemates, themed, “Show Your Innovation,” held in Lagos.

MD/CEO of the Bank, Ifie Sekibo disclosed that Heritage operates with a philosophy to offer world-class banking services with guaranteed convenience on the platform of simplified service innovation, leading technology solutions and experience-driven relationship management.

Reviewing the presentations of contestant’s individual tasks, Sekibo who was represented by the Head, Content and Digital, Nsikak Ifiet commended some of them on the marketing strategies adopted, captivating messages which  highlighted  product advantage, abilities to identify the target audience and the clear call to action with relevant information.

He advised the contestants not to de-market competitions’ products when promoting their own brand. According to him, it is important to focus on your product, what it has to offer and the value it will give to the consumers.

To ensure a balanced form of assessment during the boardroom session presided over by the experienced panel of Judges and in the spirit of meritocracy, each contestant was given a time limit to strictly adhere to during their presentation. After which, each Judge meticulously took out time to allot their assessment on each contestant with constructive criticism.

Five of the eight contestants who presented before the panel were saved and will remain in the house until the grand finale of the show. The successful contestants include; Victor Emaye, Joy Badaki, Esin Mariah, Dolapo Quadri and Adausu Taiwo, while the evicted contestants who were meant to give their final words before leaving the house were Omobolaji Shittu, Fiberesima Ibi and Orji Hyacinth.

Also, the Judges of the boardroom session comprised Chris Parkes, Kyari A. Ebuka and Nsikak Ifet.

How God’s grace kept us throughout 2021 – Speaker Obasa