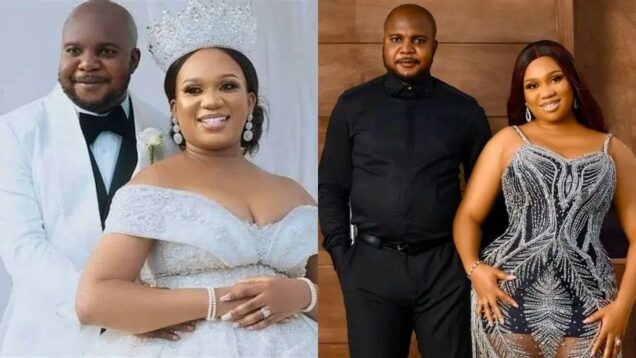 Popular socialite and fourth baby mama of Ubi Franklin, Sandra Iheuwa, has reportedly been sent packaging from her matrimonial home by her husband, Steve Thompson.

Thompson claimed he spent N45 million marrying someone he knew nothing about.

According to him, he married a wrong woman who only knew how to fight and stated some of the other reasons behind their marriage crash via a series of Insta story posts.

“I have to make a statement and this will be my first and last. My marriage to Sandra can never work again because of her too much use of social media.

“She doesn’t care about the home. She is bragging about how she cooked three times,” he wrote.

He added: “Truth is I will not let anyone tarnish my good image. I married the wrong woman that knows how to fight. She is fighting everyone.

“She even lied that I gave her std. I have been (on) my own for 4 years ooooo. Now just 5 months wahala wants to kill me.

“I moved her things myself immediately she left for the village. Her stuff are in my sister’s place in Phase 1.

“She did not move out, I moved her before her wahala kills me and told the estate gate not to let her in.

“This is my second marriage, right now I will focus on business. No man can marry this babe. I wasted N45 million marrying someone I don’t even know.”

In December 2021, Steve Thompson, the Royal Hairs boss deleted her photos on his Instagram page.

This came a few days after Iheuwa was involved in a fight with her baby daddy, Ubi Franklin.

She warned the latter against posting photos of their daughter on social media.

Thompson and Iheuwa tied the knot in a flamboyant wedding ceremony.

Their marriage took place in Mbaise, Imo state on August 7, 2021.

They are expecting a baby together.

As of the time of this reportage, Sandra Iheuwa was yet responded to her husband’s claims.

Eternals Will Finally Stream ‘free’ on Disney Plus