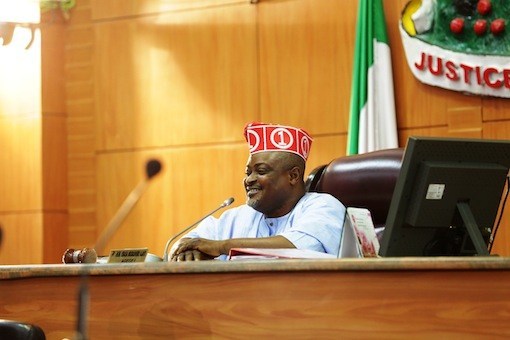 Hon. Mudashiru Obasa was on Friday re-elected Speaker of the 9th Lagos State House of Assembly in a consensus agreement by the lawmakers.

There was no other nomination for the position. All the returning former principal officers also retained their positions, they are: Hon. Wasiu Eshilokun-Sanni as Deputy Speaker; Hon. Sanai Agunbiade, Majority Leader; Chief Whip, Hon. Rotimi Abiru; Deputy Majority Leader, Hon. Olumuyiwa Jimoh; the only new principal officer is the Deputy Chief Whip, Hon. (Mrs.) Mosunmola Sangodara who took over from the outgoing Deputy Chief Whip.

In his keynote address earlier, Governor Babajide Sanwo-Olu expressed gratitude to Lagosians for voting for APC as evidenced in the Lagos Assembly made up of all APC members, saying it is an eloquence testimony of Lagosians preference for progressive ideals.

While proclaiming the Assembly, Sanwo-Olu, stated that he would be inaugurating the 9th Assembly in line with Section 105, sub-section 3 of the constitution.

The governor, who appreciated the people of Lagos State for their support at the polls, urged the lawmakers to live up to the expectations of the people.“As you commence the legislative duties it is important to remind ourselves that we are all accountable to the people of the state. The essence of democracy is checks and balances and separation of power. Lagos State has always been a pacesetter and it will continue to remain one.

See also  Your comprehensive guide to this fall's biggest trends

“As progressive partners in this dispensation, we have a responsibility to raise the bar and it is important to uphold this. We should activate the process to develop the state that is home to over 20 million people,” he said.Sanwo-Olu, who was represented by his Deputy, Dr. Obafemi Hamzat, added that the responsibility for oversight functions and the accuracy with which it deserved was very important for the lawmakers, stressing that he was committed to the full implementation of the 2019 budget, which he said was important to the progress of the people of the state.

“I will be seeking your support for the quick passage of some bills that will be useful for the progress of the state. I must congratulate all of us for the victory at the polls. We must honour our National Leader, Asiwaju Bola Ahmed Tinunu that has worked hard to sustain our democracy. I wish you a successful tenure in the 9th Assembly,” he said.

In his speech after he took the oath of office, Obasa thanked the governor for proclaiming the 9th Assembly and congratulated him for his election, he also thanked party leaders.

He commended Lagosians for the trust reposed in their representatives through their votes at the election.

Obasa expressed gratitude to his colleagues for the confidence reposed in him by reflecting him for a second term, saying he is aware of the responsibility the office demands from him, he also thanked his constituents in Agege for giving him a fifth term making it possible for the speakership position.“I promise to make you proud, I will not let you down, your re-electing me for a second term  as speaker goes a long way to demonstrate the level of confidence and trust reposed in me”.