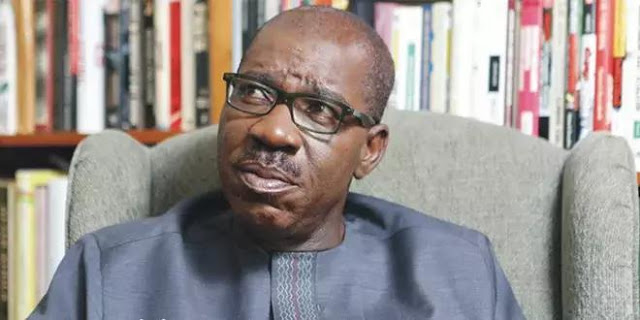 There are eerie similarities between Governor Godwin Obaseki of Edo State and Icarus, the son of Daedalus, the famous craftsman in Greek mythology.

As the story goes, Icarus and his father attempted to escape from prison using wings that the older man constructed from feathers and wax.

Icarus’ father warned him about complacency and hubris and asked that he flew neither too low nor too high so that the sea’s dampness would not clog his wings or the sun’s heat melt them.

Icarus ignored his father’s instructions and flew very close to the sun, then, the wax in his wings melted and he fell into the sea.

The moral of the myth is the need for personal ambitions to be guided by knowledge, balance and self-discipline.

The absence of these qualities in personal, professional or political dealings is now globally known as the Icarus Complex, which many, who know say, Obaseki is suffering acutely from.

This was first made public by the governor’s first cousin and acclaimed filmmaker, Dr Don-Pedro Obaseki, who on the eve of the 2016 election said Obaseki is an accustomed traitor, who could not be trusted with power and, therefore, undeserving of the people’s votes.

However, the people were swayed by the robust and rousing promises of former Governor Adams Oshiomhole, a leader they had implicit confidence in and who vowed and assured the people that Obaseki would continue with his legacy and take the state further than he did. That, of course, was all that the people needed to trust him with their mandate.

What Obaseki met on the ground was a feasible and functional template, which he only needed to build upon.

Alas, he came with a different agenda that is self-serving at best and hideous at worst and which has, unfortunately, plunged the state into a quicksand.

Obaseki has come full circle. He has unravelled as a patently retrogressive and power-drunk, who cannot be trusted with public office and the people’s common patrimony.

He is now sold on his faux invincibility and has crossed into the age of hubris during which he started fighting many avoidable battles.

He also wilfully weaned himself of those who could steer him aright. Things are so bad for him right now that that at no time in recent memory had a people unanimously and openly made it known that they were better off with a pre-schooler than him as a governor.

Without a doubt, his desire for a second term is legitimate but his wanton mismanagement of the state and the people, as well as his massive ego, which is a kind of deformity akin to virulent cancer that is constantly metastasising to the point of self-consummation, has turned him into an anathema in the state.

No government or society can survive without the private sector yet, Obaseki’s blasé intolerance and scant regard for the rule of law with the consequent inability to attract investments, has almost driven the private sector in the state into extinction.

It is the same intolerance that has seen him engage in several confrontations with many Edo elders notably Oshiomhole and one of Edo State’s most illustrious sons, Captain Idahosa Wells Okunbo.

Despite several rebuttals that he has no interest in the governorship of the state, Obaseki has been using every available means to throw mud at the successful businessman and philanthropist.

But, instead of rolling in the mud with him, Capt Hosa, as he is fondly called, has maintained an avuncular and dignified stance.
A businessman, who has conquered the air, land and sea and with honours from all over the world, Capt. Hosa is not just an epitome of integrity and incorruptibility; he is a straightforward individual, who does not shy away from taking responsibility for his actions.

Capt Hosa has told whoever cares to listen that the only thing close to his heart now is giving back to humanity from the abundance of what God has blessed him with, not a political office.

Still, Obaseki paid no heed to this admonition as he continued to denigrate and deride a man whose ingenuity birthed among other economic concerns, the $750m Wells Hosa Green House Farm in Ovia North-East area of the state, which stands on 27 hectares of land and has the capacity for 28 hydroponic greenhouses, projected in the first instance to generate 25,000 direct jobs and 60,000 indirect jobs.
That’s just one out of many things he does for his people. Captain Hosa’s philanthropic activities are the stuff of legends.

It is this selfless man that Obaseki wanted to get rid of. What a joke of a governor!
Well, the governorship election is just a few weeks away and the mood in the state is already upbeat. Many cannot wait for September 19 to come so they can lawfully replace him with Pastor Osagie Ize-Iyamu, candidate of the All Progressives Congress, APC.

And it is not hard to see why there are so much expectation and enthusiasm towards Ize-Iyamu’s expected electoral victory.

Pastor Ize-Iyamu is a thoroughbred Edo son and lawyer, whose political experience is peerless.

With the return of Nigeria to democratic rule in 1999, he was appointed as Chief of Staff to former Governor Lucky Igbinedion. When Igbinedion was re-elected for a second term, he elevated Ize-Iyamu to the position of Secretary to the State Government.

He went on to serve as Director-General of Oshiomhole’s second term campaign organisation. Beyond all these, the people have come to embrace his SIMPLE Agenda to rejuvenate and rebuild the state.

The SIMPLE agenda, therefore, is centred on Security and Social Welfare, Infrastructure Development and Urban Renewal, Manpower Development, Public-Private Partnership, Leadership by Example, as well as Employment and Empowerment Scheme.

“The summary of the SIMPLE agenda with its deep intentions and objectives, are unified in purpose and conception, showcasing a deliberateness that is vital for progress and development.

As you all know, unfortunately, these are traits missing in the Edo leadership as presently constituted, where the scarce resources rather being used for the betterment of its citizens, are channelled to promote violence and thuggery, victimisation and plunder,” he said.

It is yet to be seen how Obaseki, with his current political misadventures, intends to beat the September 19 defeat. Certainly, not with the odds increasingly stacked against him. He’s picked too many but wrong political battles and definitely set to stew in his own juice, come September 19.