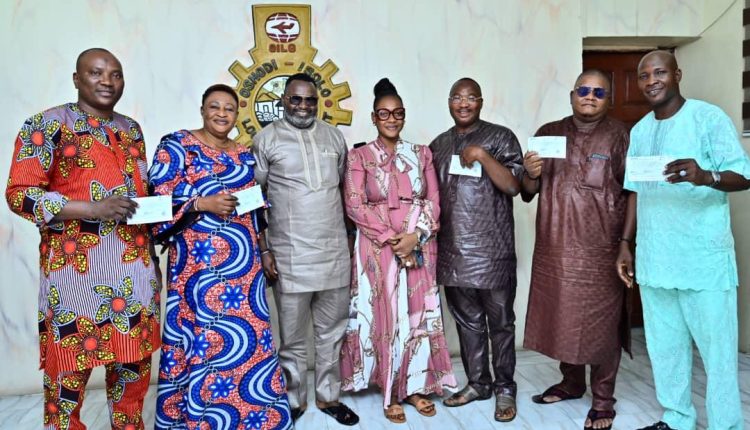 The executive chairman of Oshodi-Isolo local government, Otunba Kehinde Almaroof Oloyede, has paid the severance allowances of the former political office holders of the former administration.

The former political office holders who served under the immediate past chairman, Hon Bolaji Muse-Ariyoh as either supervisory councillors or special advisers were paid their due severance package on Thursday by the council chairman.

While handing over the cheques to the former political aides Oloyede said he operates an open door policy saying everyone is welcomed in his government.

During the presentation, however, a former Special Adviser on Environment, Mr Yusuf Adesanya, pleaded with the chairman to extend a hand of fellowship to the former chairman, Hon Muse-Ariyoh.

While responding, the council boss said he has no grudges with Ariyoh nor with anyone within or outside the party.

He said; “I have made efforts to relate with all members of the party and party leaders. I have no grudges with Ariyoh. I am telling you again, I have nothing against Ariyoh.

“I want you to reach out to him and tell him that I have nothing against him. If there is unity among us, there is nothing we can not achieve in Oshodi. All we need is unity and synergy. I will make sure we resolve all internal wranglings within the party and bring everybody back in one united fold.”

Adding that “the local government belongs to all of us and we are aimed at developing it. Ariyo is my brother and I have reached out to him on several occasions”.

It would be recalled that the payment of political office holders severance packages was supposed to be paid by the former administration but this did not happen.

Oloyede appreciated the service of the former office holders as he handed over the cheques to them.

“Your services to the council are well appreciated and we wish you well in your future endeavours”, he said.