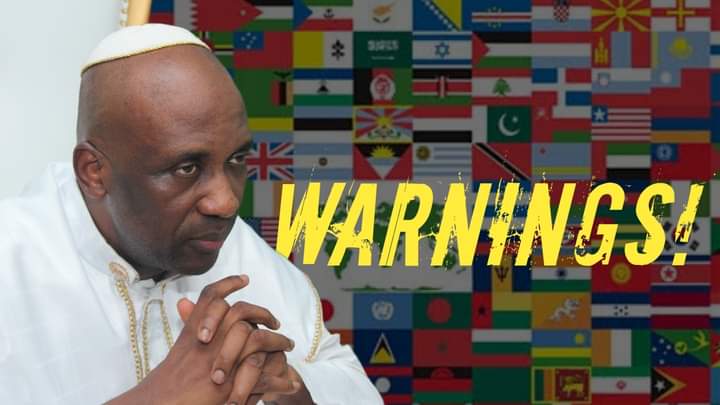 The Leader Of INRI Evangelical Spiritual Church, Primate Elijah Ayodele has sent series of warnings to the governor of Cross River state, Ben Ayade and governor of Ebonyi state, Dave Umahi ahead of 2023.

Primate Ayodele in a statement signed by his media aide, Osho Oluwatosin revealed that the governors will be disappointed because their mission in 2023 will not be accomplished.

‘’The governor of Cross River state, Ben Ayade will be disappointed. Especially in 2023, his followers will kick against his instructions. His mission for 2023 pushed him to decamping to the ruling party will not be achieved’’

For the Governor of Ebonyi state, Dave Umahi, Primate Ayodele made it known that his mission to become the president or vice president will not see the light of the day as he will be jeopardized politically.

He revealed that towards the expiration of his tenure as governor, most of his trusted aides will disappoint him. He advised that if he wants to stay relevant in politics, he should trace his ways back to his former party, PDP or he will go oblivion politically.

‘’The mission of Ebonyi Governor, Dave Umahi to become the president or vice president will not see the light of the day, he will be jeopardized politically and his party will not win his state in 2023’’

‘’Towards the end of the expiration of his tenure, most of his trusted aides and political allies will disappoint him. If he wants to stay relevant, he should return to his former party or go oblivion in the state. APC cannot win Ebonyi in 2023’’

Furthermore, Primate Ayodele spoke on the south east presidency agenda of 2023, explaining that betrayals is the reasons the zone will not get the presidency seat. Speaking on the killings and crisis happening in the zone, the man of God made it known that bad governance is the reason behind it not any group.

‘’Don’t blame any group for the killings in South East rather blame bad governances. The South East political leaders are betrayals of trust, that’s why they won’t get presidency’’

It would be recalled that Primate Elijah Ayodele warned the governors of Ebonyi and Cross River state not to cross to the ruling party months before they made the move because he foresees disappointment in their sojourn into the ruling party.

Related Topics:Primate Ayodele
Up Next