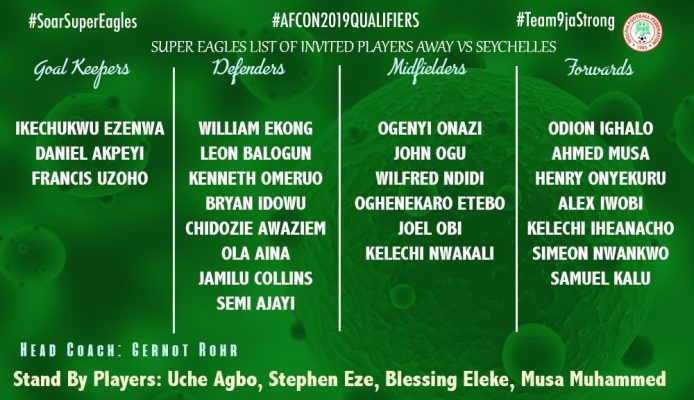 As the most anticipating Nigeria Super Eagles match against the Squirrels in a crucial Africa Cup of Nations qualifiers draw closer, many football analyst  have started suggesting the likely starting eleven base on the players in camp.

Below are the list, position and current form on the pitch.

#1 Maduka Okoye (goalkeeper)
The Sparta Rotterdam goalkeeper will be expected to be between the sticks with Gernot Rohr disclosing to the media on several occasions that the 21-year-old is now the Super Eagles’ no. 1

#2 William Troost-Ekong (centre-back)
The Watford centre-back has established himself as a strong force in the Super Eagles’ defence and he should continue his role in Rohr’s team at the Stade Charles de Gaulle.

#3 Leon Balogun (centre-back)
Balogun has been impressive in the Scottish Premier League with Rangers this season and his defensive contributions will be needed on Saturday.

#4 Semi Ajayi (Centre-back)
Although he was selected as a midfielder in the initial 24-man list, Ajayi could form a three-man defence with the ‘Oyingbo Wall’ as Nigeria aim to stop the Squirrels.

The 27-year-old has been a regular fixture in West Bromwich Albion’s defence this season as a centre-back.

#5 Ola Aina (right-back)
Aina’s dexterity will be required for both attacking and defensive plays.

#6 Zaidu Sanusi (left-back)
Thanks to his fantastic performances for Porto, Sanusi might be the preferred option in the left-back position ahead of Jamilu Collins, who plies his trade in the German second division with Paderborn.

#7 Wilfred Ndidi (midfielder)
Ndidi’s quality in the middle of the park cannot be questioned and he will play the anchorman role in the Super Eagles midfield.

#8 Alex Iwobi (midfielder)
The Everton star will take his place in the centre of the midfield. Iwobi is needed to provide the creative link between the midfielders and the forwards.

#10 Kelechi Iheanacho (left wing)
Iheanacho’s impressive goalscoring form at Leicester City will earn him a spot in the starting XI and he is expected to boost the Super Eagles’ chances of getting a win away from home.

#11 Victor Osimhen (centre-forward)
Despite scoring just one Serie A goal so far this year, Osimhen is tipped to lead the Super Eagles’ frontline ahead of red-hot Genk star Paul Onauchu.

Related Topics:Africa Cup of NationsBeninBenin vs NigeriaFootballSoccerSuper Eagles
Up Next

DBN Brightens the Year for MSMEs with New Products