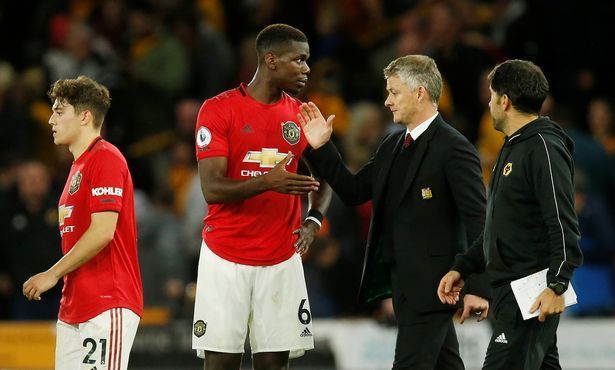 Ole Gunnar Solskjaer has revealed Paul Pogba and Marcus Rashford are both Manchester United’s penalty takers and it is up to them who steps up each time.

French midfielder Pogba saw his spot-kick saved by Wolves keeper Rui Patricio, having won the spot-kick himself, during United’s 1-1 draw at Molineux.

It came a week after striker Rashford scored his effort in the 4-0 thrashing of Chelsea.

The pair were seen discussing who would take the penalty before Pogba’s flop, with Gary Neville admitting he was fuming when he thought Pogba had nicked the penalty off Rashford.

But manager Solskjaer has explained why Pogba took the penalty and not Rashford on this occasion.

“The two of them are designated penalty takers,” Solskjaer said on Sky Sports. “It is up to them who take it there and then.

“Sometimes players feel like they are confident to score. Today Patricio made a good save.

“You can see the slide on the powerpoint that this is the plan.

“We won’t change it after this week. The two have been confident. Last week Marcus scored a goal and today Paul was confident.

England star Rashford added that Pogba had insisted how he wanted to take the penalty.

“Paul wanted to take it,” Rashford said. “It is that simple. Everyone can miss one. He has scored plenty of penalties in his United career.

“If you want to take it you take it. I took one last week and it is unfortunate he missed.

“The confidence you will score the goal is always high. There is no reason you wouldn’t be confident to take it. It isn’t just on him, it is on the team.”