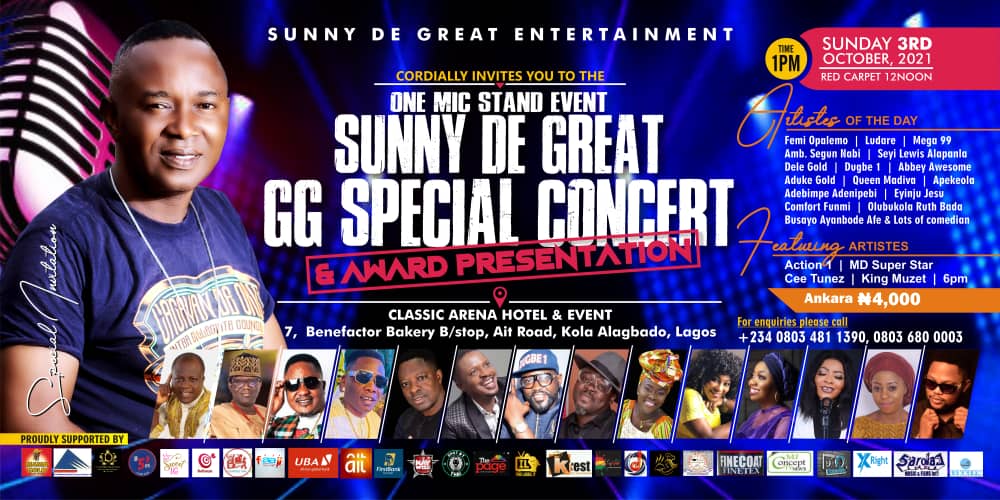 Lebanese – American writer, poet and visual artist Kahlil Gibran said “Music is the language of the spirit. It opens the secret of life bringing peace, abolishing strife.” Stress is a silent killer that most residents of Lagos and its Ogun State boundary towns are exposed to on daily basis, entertainment is a known therapy to reduce its adverse impact and that is the reason Sunny De Great Entertainment, an entertainment organization under the leadership of Sunny Akanbi, a seasoned broadcaster of more than two decade will this October entertain and honour the people and some deserving individuals and musicians with a One Mic Stand eveny tagged: Sunny de Great GG Special Concert and Awards.

The event which is scheduled to come-up on 3rd of October at Classic Arena Hotel & Event, AIT Road, Alagbado Lagos, will give the people a chance to enjoy performance of musicians they only watch on Television perform live. Some of the expected artistes are; King Femi Opalemo, SEGUN Nabi, Mega 99, Seyi Alapanla, Amb. Dugbe1, Dele Gold, Abbey Awesome, Aduke Gold and more others.

According to Sunny Akanbi de Great who is also the organizer, the events is to appreciate God and those that has been supporting him for more than 20 years he has been practicing as a broadcaster. He explained further that the event will also serve as a stage for aspiring entertainers to tap from the wealth of knowledge of those that will be present.

The talented freelance broadcaster who currently anchors ‘Gbangba-lasha-n-ta’ a Yoruba program on Roots FM Abeokuta and ‘Se-Ise-n-ya?’ another program on Lekki FM, had worked with The famous female talking drumer Aralola popularly call Ara. He had also worked as a chanter with SEGUN Nabi and has worked Master of Ceremony at so many event within and outside the country.

It is promises to be an event that will last long in the memory all, as expected has promised entertainers have given their word.