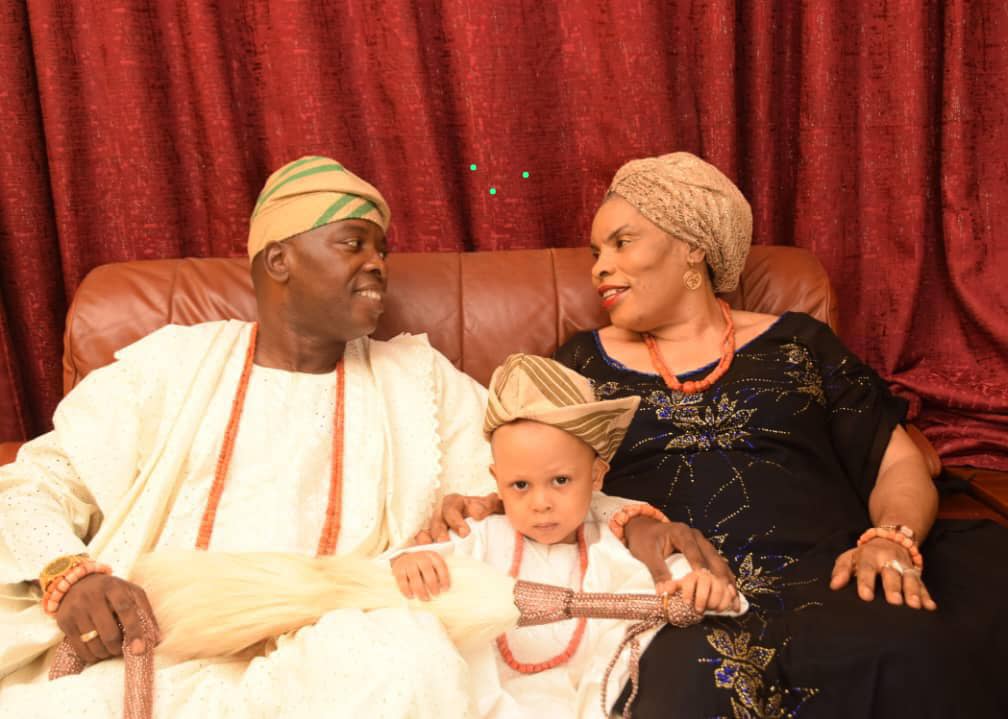 He has an irresistible aura as a royal father, and he has been at the level of relevance since he mounted the throne of his forefathers few years ago. His Royal Majesty, Alaiyeluwa Oba (Dr.) Adeoriyomi Oluwasesan Abdul-Akeem Oyebo (arpa) was born into the popular Oyebo Royal family of Egbin, Ijede and Ikorodu, to Late Prince Abdul Rasaq Adebowale Babatunde Oyebo, a merchant/producer of under wares in the 60s and later a building merchant, popularly called Baba Onicement (Cement dealer) and Late Princess Kehinde Amoke Oyebo (nee Opeifa,) Osolo of Ilogbo Otta and Awujiku (Fowotade) Onikosi Royal family, Isipo Idota Royal family, (Mupin Otta) respectively, an accomplished trader and textile merchant popularly called Iya Alaso (Textile dealer) and Iya Shaki. Oba (Dr.) Adeoriyomi Oyebo started his early life by living with his grandfather, Alh. Omo Oba Fasasi Odutola Oyebo, alias (Baba Orere or Baa ‘Lebe) at Ijede, and started his primary education in Ijede, while in Primary School, he also enrolled and graduated from the famous Orisumbare Islamic School, Ijede, in 1973.

After his primary education, the young prince was taken to Otta, Ogun State (his maternal grand-parent’s home) to further his education in both western and Islamic education at Ansar-ul-deen Grammar School, and Late Alfa Oloungbebe Islamic School both in Otta. After completing secondary school and graduation from Islamic school and given his flair for wisdom and a better understanding of humanity, he understudied traditional herbal and spiritual practices from his maternal uncles: Chief Karimu Alamu Opeoluwa (Karimu Panti or Baba Osi) and Chief Alani Kasumu, the then Oluwo Ile Nla (Iledi Ogboni) Otta in Ogun State.

Coming from a background that was deeply rooted in business, Oba Oyebo went into trading in clothing materials, a business he understudied from his mother.

He was in this business for over Seven (7) years before going back to further his education where he obtained an OND certificate in General Arts and HND certificate in Graphic Design at the Great College of Technology, Yaba Tech. He later proceeded to U.K. for a post graduate diploma in Applied Arts, at Glasgow college of Art, Glasgow Scotland after the compulsory one-year National Youth Service Corps (NYSC) and later got a Master degree in industrial Product design. Given his flair for business, he established his first company, Printarts Communications in 1989, which later metamorphosed into Printarts Limited, a printing and publishing company, in 1993.

To gain more experience in the business world, he joined COW-LAD & Associates, as an Associate Director in the same year. In 1997, he established a construction company known as Brickstech Constructions Ltd. and later diversified in 1999, into the food and beverages industry, with the establishment of Destination Foods & Beverages Ltd. At the introduction of GSM to Nigeria Telecom industry Kabiyesi and one of his uncle co-funded another company Oyebo Trading and technologies Ltd, the company was engaged in the business of importation of GSM accessory from Nokia communication Europe and China, branded OT&T into Nigeria market, the company has since stopped the importations of this because of the floored of inferiors of this product in the market today. However, in early year 2000, he was invited to set up and run Tulsa Press Ltd, as the founding Managing Director, After putting the company on good footing; he resigned in April 2004 to concentrate on his own businesses and to further his education. He enrolled for a second degree in Industrial Product Design.

The same year, he qualified and was inducted as an Associate Registered Practitioner of Advertising (arpa), a Professional Membership of Advertising Practitioners’ Council of Nigeria (APCON). He continued his quest in the business world by establishing his own Advertising and Marketing company, Exradia Ltd., Jullipeph Ventures Ltd. and Oritoil Petroleum Ltd. It should be noted that he runs all these companies till date. Some of his companies mentioned above has participated in many national and international promotional campaigns for Federal Government of Nigeria, such as Commonwealth head of Government meeting held in Nigeria (CHOGOM 2003), African Union (AU) meeting, Ecowas Trade fair (2005), National Health Insurance Scheme (NHIS) (2005), Africa Fertilizer Summit (2006), Africa / South America Summit, Re-branding of Nigeria Image (Nigeria the Hearth of Africa Projects), The Country Review Team (CTR) The African Peer Review Mechanism (APRM) NEPAD Meeting (2008), Production, Printing and supply of Media and National Campaign/Publicity Materials on Avian Influenza (Bird Flu), Swine Flu, Roll Back Malaria, etc. Printarts Ltd. has published and printed many books such as: Citizen Education for Tertiary Institutions. 1 & 2 (By Alake A. A.), Nigeria Business & Co-operative Law (By Owolabi N. B.), Media Law & Ethics in Nigeria; a Comparative Analysis (By W. Olafimihan Fatoba), Company Law in Nigeria (By W. Olafimihan Fatoba), Business Communication and Use of English (with Practical Persuasive Communication Skills) (By N.B.A Sannie), Question and Answer on Introductory Psychology (By B. A. Saminu), Media Law & Ethics in Nigeria. A Comparative Analysis (By W. OlafimihanFatoba, Introductory to Sociology (By Alake A. A.) and many more. The companies have also worked for top notched banks such as: Standard Trust Bank (now UBA), Stanbic Bank Plc. (Standard Bank of South Africa) now Stanbic IBTC, etc. His Royal Majesty, Alaiyeluwa Oba (Dr.) AdeoriyomiOluwasesan Abdul-Akeem Oyebo was selected by the family and was elected by the Kingmakers in Egbin Kingdom for the throne of his forefathers on the 4th of April, 1999 and was crowned as the Obateru of Egbin Kingdom, on the 22nd of April, 2010. Does, occupying the exalted position of the Spiritual and Traditional leader of Egbin Royal Kingdom.

His flair for business after his installation as Obateru of Egbin Kingdom has given birth to another line of business named Brichstech Dredging Ltd. a sister company to Brickstech Constructions Limited, (privately owned) in partnership with some Chinese Nationals to import a new sand dredging machine launched into Egbin lagoon in the year (2014) for dredging and Stock piling activities to support the civil and building constructions work of Brickstech Constructions Ltd. also, Kabiyesi recently established a new alternative Power Company, African (Best Quality) Solar Power Company Ltd, in partnership with his Chinese Nationals, representing a Solar Power Company in Germany and China in the entire continent of Africa. His Royal Majesty, Alaiyeluwa (Dr.) Oba Adeoriyomi Oluwasesan Abdul-Akeem Oyebo (arpa) is a royal personality with a sound entrepreneur mind-broad working experience, travels and exposure. A traditional ruler who is always ready to learn more, has a very vast knowledge of the history of his people, a register reader of National Archive and Records, Quay Garden, London, United Kingdom, Lagos State Records and Archive Bureau (LASRAB.) As a ruler and a business man, he has organized many workshops, seminars, trainings, conferences, retreats, health awareness, free health screening and treatment on Malaria, Cancer, Hypertensions, Avian Influenzas, screening and donation of eye glasses, Scholarship and Empowerment for his people.

He has touched the lives of many people and his philanthropy and impact on the lives of people has earned him a lot of awards and recognitions from all works of live which includes the conferred of a Degree Certificate of Doctor of Arts in Public Leadership, Peace and Community Leadership Honoris Causa of the European-American University in August, 2014. Kabiyesi recently established the first Primary School in Egbin Kingdom, giving all free Education to over 500 pupils in both Nursery and Primary School, with over twenty teachers and giving free books, uniforms and other learning materials and paying the teachers from his personal purse.