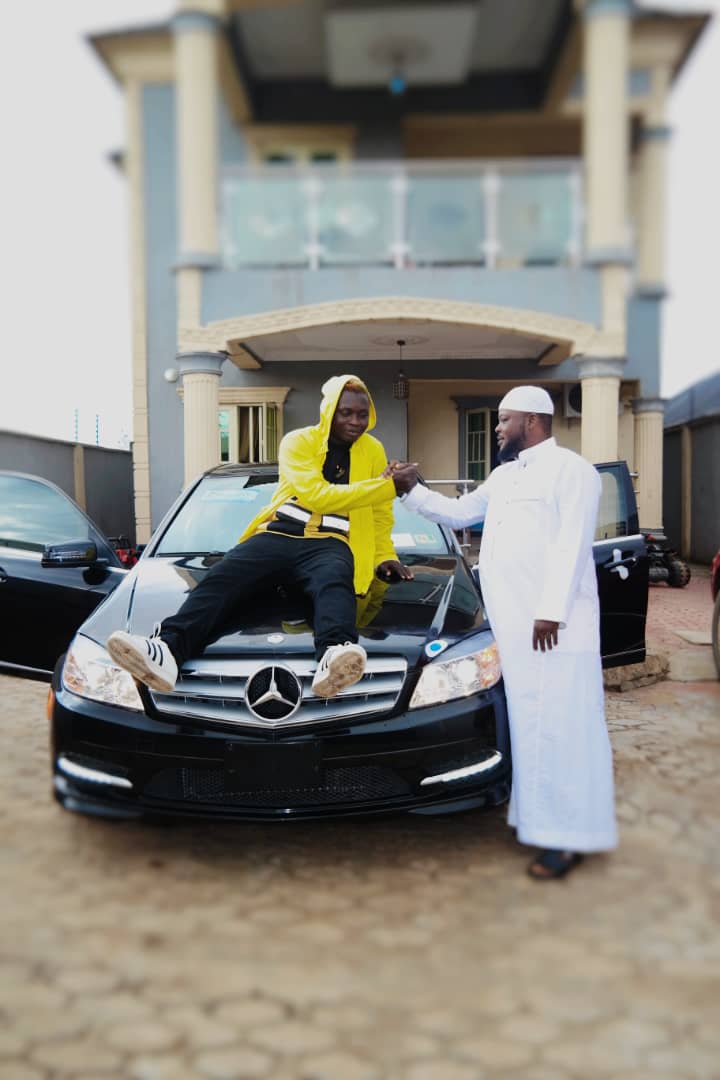 Danku bought this car to surprise his artiste who has been very loyal to him since years both have been working together.

The black colour Mercedes benz C 300 is worth six million naira. It is purchased to surprise the singer.

Oluwasuen was very elated when he saw the car dealer delivery the car at his compound, Abule Egba, Lagos on Wednesday 18th September 2019.

“I’m very happy for this gift. Danku has been very supportive since we started together. He remains my role model. I will never disappoint him”, Oluwaseun said.

Meanwhile, Danku and Oluwaseun alongside Dan Marlic have jointly released Ijoba Federal video. The video was directed by Fizzle & Bizzle.

It would be recalled that Adepitan Yusuf hailed from Epe , Lagos State.

His love for entertainment started at tender age. Yusuf has a popular name that made lots of music fans associate themselves with him. Due to his height he was given Danku by his admires. This name has brought him fame and fortune.

His management experiences started with Afro Pop Singer, Lawal Olumo aka Konga. He took him on Nigerian Musical Tour. He toured Lagos, Abuja, Kano, Kaduna Enugu, Port harcourt, Oyo State and other major places in Nigeria.
Danku was later recruited as the A & R of Foxtrox Music. He was at the helm of affairs at the record label. He released Slim joe, ‘Oti Yan Yan’ album. The song was a national anthem in the country.
After the singer left the label, he convinced the label that the next artiste the label could bank on was Lace. The Benin Republic music star never knew he could become a star suddenly. But Danku with his personal effort made him a star. Lace under Danku leadership, released ‘Se Bi Wo’. The song became instant hit in the entertainment industry.
However, Danku who has love for raw talents invested in another upcoming artiste, Oluwaseun. Under Danku, Oluwaseun released Olele ft Olamide. The song was well promoted. He drives the young lad to record with Terry G, Reminisce and Oritsefemi.

As a result of his versatility, Afro Pop Singer, Klever Jay wooed Danku to work with him. Klever Jay teamed up Danku to drop Omo Aye and Peperenpe respectively. The songs top music chats on Radio Stations in Nigeria.

When Afro Beat star, Oritsefemi reads his profile as one of the consistent artiste managers/promoters of our time, Oritesefemi called him for a meeting. The rest are history as both started working together. Double Wahala and Sexy Ladies ft Davido were concept of the Epe born artistes’ manager.

The prolific promoter as well worked with Terry G. House of Ginjah boss made him head promoter while both were working together.

Danku is a bundle of talents as far as promoting music and artiste management are concerned.

Yusuf international exposure took him to United Kingdom where he promoted Slim Joe, Oti Yayan singer on seven cities musical tour in United Kingdom in 2012-2014.
Terry G to U K, South Africa and others 2013-2014.
Oritsefemi to Malaysia, U S A, United Kingdom, Egypt, Russia and some other European Countries 2014-2015.