We will keep doing everything to grow Lagos - Speaker Obasa 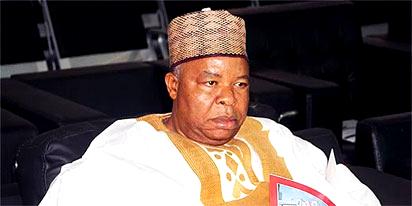 President of the Senate, Senator Ahmad Lawan has described the late former Deputy Senate President, Senator Ibrahim Mantu as a Nigerian who lived a life of service to his people and to the entire nation.

In a statement on Tuesday in Abuja by his Special Adviser, Media, Ola Awoniyi, Lawan said that the late former Deputy President of the Senate left his imprints at the Senate, having served creditably well in his days at the Upper Chamber

The President of the Senate who sent his condolences to the family of Ibrahim Mantu, also commiserated with the friends and political associates of the former Senator, as well as the government and entire people of Plateau State over the huge loss.

Mantu, 74, died in the early hours of Tuesday after a brief illness. The statement read, “Mantu had a brilliant political career which he capped with the quality representation he provided the people of Plateau Central District as their two-term Senator between 1999 and 2007.

“As Deputy Senate President, Mantu played the role with great energy and finesse, which earned him the respect and admiration of his colleagues, Distinguished Senators.

“The former Deputy Senate President lived a life of service to his people and to the entire nation. He left his imprints at the Senate, having served creditably well in his days at the Upper Chamber.”

The Senate President prayed for Allah to rest Mantu’s soul in eternal bliss and to comfort the many people who are saddened by his death.

In a condolence message by his Special Adviser, Media and Publicity, Yomi Odunuga, Senator Omo-Agege saluted his patriotism and commitment to building a viral Legislature, having served as Deputy President of the Senate from 2001 to 2007.

The Deputy President of the Senate who hailed Mantu’s commitment to meet the needs of his community as a two-term lawmaker, devotion to national development, stressed that his insightful contributions at the floor of the Senate would be fondly remembered.

The statement read, “Omo-Agege sent his heartfelt condolences to the government and people of Plateau State as well as family and friends of the deceased.

“Distinguished Senator Ibrahim Mantu served the Fourth and Fifth Senate between 1999 and 2007 with compassion and diligence. He served the Senate in various capacities from Chairman, Senate Committee on Information, Deputy President of the Senate as well as Chairman, Joint National Assembly Constitution Review Committee.

“Similarly, he chaired the Policy Analysis and Research Project (PARP) which metamorphosed into National Institute for Legislative and Democratic Studies (NILDS), Amirul Hajj from 2005 to 2006 and also superintended the Palliative Consolidated Committee for Cushioning Measures.”

In a statement yesterday in Abuja by his Media Adviser, Paul Mumeh, Mark lamented that the former lawmaker died at a time when his wealth of experience, wisdom and services were most needed to navigate through the murky political terrain.

The former President of the Senate who noted that Mantu was a flamboyant leader who brought panache, character and sagacity to the political space, said, “In Mantu, I have lost a friend, brother and compatriot who believed in the sanctity of our unity and ideals of nationhood.

“Mantu played a politics of inclusiveness, fairness, equity and justice. He was a politician who built bridges of understanding across the length and breadth of Nigeria.

“He was a political leader of high repute. He stood to be counted when it mattered. His death is indeed one too many. He will surely be missed.

“I am however consoled that Mantu lived an exemplary life worthy of emulation.”

Senator Mark prayed that God in His infinite mercies grants him eternal rest and his family the fortitude to bear the loss.

Also In his condolence message, the former Deputy President of the Senate, Senator Ike Ekweremadu expressed sadness and shock over the death of his predecessor, Senator Ibrahim Mantu, noting that Nigeria had lost a legislative icon.

According to Ekweremadu, Mantu helped to shape the legislature in the current republic and also laid the foundation for the eventual successful amendments to the 1999 Constitution.

In a statement yesterday by his Media Adviser, Uche Anichukwu Ekweremadu, who succeeded Mantu as Deputy President of the Senate in June 2007, said: “I received with a deep sense of loss the passing on of my predecessor, the late Distinguished Senator Ibrahim Mantu. This is a heavy loss to the nation, particularly the legislature where his impact was greatly felt.

“He played critical roles in reinventing the legislature with the advent of the current democratic era.

“In particular, as Deputy President of the Senate and Chairman of the Joint National Assembly Committee on Constitution Amendment, Senator Mantu will be remembered for pioneering the constitution amendment process in the current democratic dispensation in response to agitations over the many inadequacies and contradictions of the 1999 Constitution.

“Although no successful amendment was recorded in the Fifth National Assembly under him, obviously due to lack of template of procedure and experience by a National Assembly that was just truly re-emerging after decades of military rule, the challenges encountered by that attempt ably chaired by Distinguished Senator Mantu helped us to chart a procedure, avoid some pitfalls, and ultimately break the jinx in the Sixth National Assembly. Since then we have gone on to record many critical amendments especially in the areas of electoral reform and institutions building to deepen and strengthen our democracy.”

Ekweremadu described Senator Mantu as an institution builder, recalling that the deceased lawmaker was the pioneer Chairman of the Policy Analysis and Research Project (PARP), a capacity building project for the National Assembly, which he later inherited as Mantu’s successor in 2007 and helped to transform into the National Institute for Legislative and Democratic Studies (NILDS).

Ekweremadu who described Mantu as a cosmopolitan and deft politician, who while in the legislature, saw the entire nation as his constituency, said, “Senator Mantu was deeply embedded in the politics of not only the nation and our great party, the Peoples Democratic Party, but also in the politics of the apex legislature.

“Give it to him also, he was a man who spoke his mind, a dynamic, detribalised, flamboyant, and an engaging politician. There was never a dull moment with him. He will be highly missed.”

Ekweremadu prayed for the peaceful repose of the soul of the deceased lawmaker and fortitude to the Senator’s family, the Government and people of Plateau State and the Nigerian legislature to bear the irreparable loss.