Oando Foundation at 10: Improving the Environment and Learning Outcomes in Nigerian Public Schools

Book Review: The Yoruba, A New History By Akinwumi Ogundiran

A new book,The Yoruba: A New History has just been delivered by Akinwumi Ogundiran

2020 WASSCE Results, Certificates to be Released Within 90 days

Universities are ready to resume -Union

Lady Commits Suicide After Being Scammed Of Her School Fees 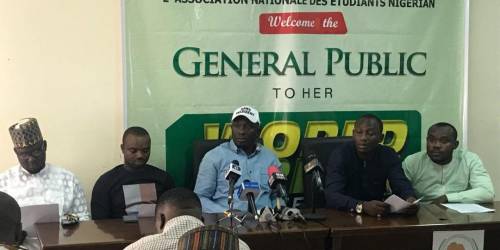 The newly-elected President of the National Association of Nigerian Students (NANS), Sunday Asefon, has condemned the #EndSARS movement, aimed at ending police brutality across the country.

Asefon, 45, said the #EndSARS protest would not solve the problem of police brutality because the Inspector-General of Police had dissolved the Special Anti-Robbery Squad (SARS) unit.

In October, youths across the country took to the streets to condemn human rights abuses by members of SARS.

The protest was later hijacked by hoodlums which led to the loss of lives and property.

This followed the killing of an unconfirmed number of youths by men of the Nigerian Army who invaded the Lekki Toll Plaza in Lagos and shot some of the protesters.

Speaking at a press conference in Abuja, the new NANS President said the association does not recognise the #EndSARS movement because it does not have a leader.

READ  How Nigeria's Afro-pop, HOLMES Turned 2020 Heat into a Hit

“Any protest that is faceless, NANS under my watch will not be a party to it,” he said.

Asefon said leaders of the association would be meeting the Nigerian government and the Academic Staff Union of Universities (ASUU) towards ending the eight-month-old strike by university lecturers.

He said he would be consulting with the representatives of the two feuding parties to find common ground to end the prolonged strike.

“I am convinced that this high-level consultation will yield a positive result, and we will not have to resort to mobilising students to mount any protest to this ridiculous long stay at home.

“NANS, under my watch, will not be complicit to such an unending strike and never again will Nigerian students have to stay home this long,” he said in a statement obtained by Saharareporters.