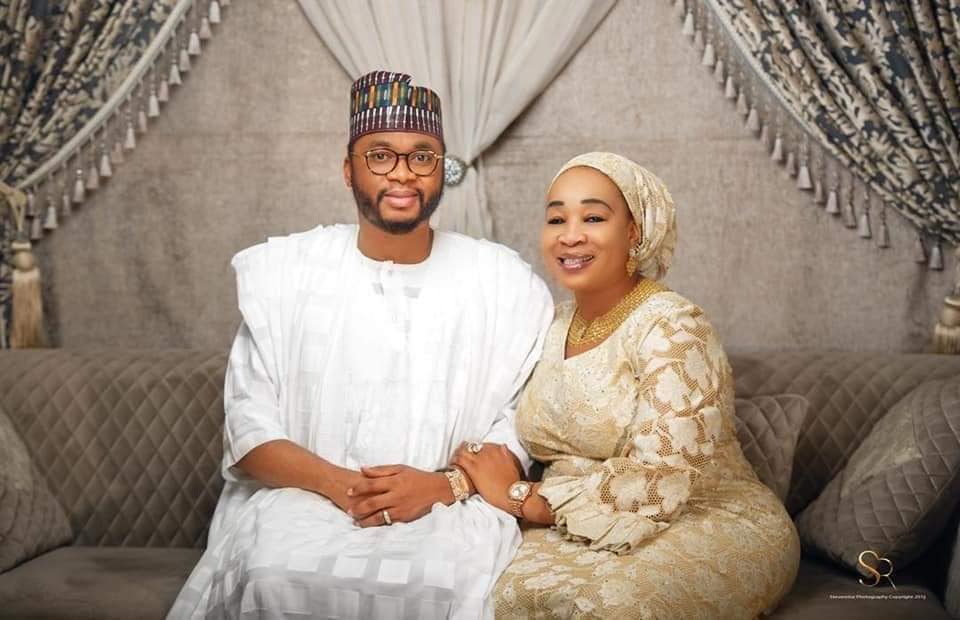 Although Hajia Hauwa Suntai, the beautiful widow of former governor of Taraba state, late Danbaba Suntai, cherishes her past, she does not want to wallow and live in it anymore.

Barely two years after her husband’s death, this youthful lady has removed the toga of widowhood and its associated miseries of loneliness and cold nights.

Hauwa has just found love and warmth in the burly arms of a boyishly handsome guy, who is reported to be a commissioner in her late husband’s government.

At the moment, the internet is awash about the new romance of Hauwa with her new beau. While many are lampooning her, her  friends and fans are strongly coming up to defend her, saying that she cannot be all by herself since her husband’s demise,in June 2017.

They said then that in October 2012, (seven years ago), when the former Governor of Taraba State, late Danbaba Suntai, was involved in a plane crash in Yola, one of the prominent faces they saw around him, before he was flown abroad to Germany, for treatment, was Hauwa Suntai,despite the fact the he had other wives.

In August 2013, he was flown back to Nigeria, after 10 months of medical treatment overseas, following claims by his supporters that he was fit to govern; still, the prominent faces around him then was Hajia Hauwa. In November 2014, when Suntai was flown to a London hospital for treatment, he was accompanied on his trip by his wife, Hauwa. Throughout Suntai’s stay in the hospital, Hauwa stood by him. In 2015, in the build-up to the general election, Suntai was hurriedly flown back to Nigeria after few months of medical trip to London; Hauwa was still the visible figure around her husband, Suntai.  In 2017, after two years of protracted illness, Suntai died at home, where he was undergoing rehabilitation for brain injuries that arose from the plane crash.

In all, Hauwa neither wavered nor faltered in the discharge of her matrimonial duties and responsibilities to her husband throughout the travails,her loved ones defended. As a dutiful wife, Hauwa obviously stood by her husband for five good years, till Suntai succumbed to the cold hands of death.

After her husband’s death, she waited for another good two years; making it seven years of unbroken tragedy and sorrow. If this widow now decides to pick herself up and move on, what crime has she committed, they argued. Today, the newly-weds have without reservation taken the world of honeymoon, to explore their new love and new beginning together.

Race to replace Theresa May gets underway

Koko Master, D’banj’s Gold Chain Worth Millions Of Naira Stolen On A Flight To Lagos