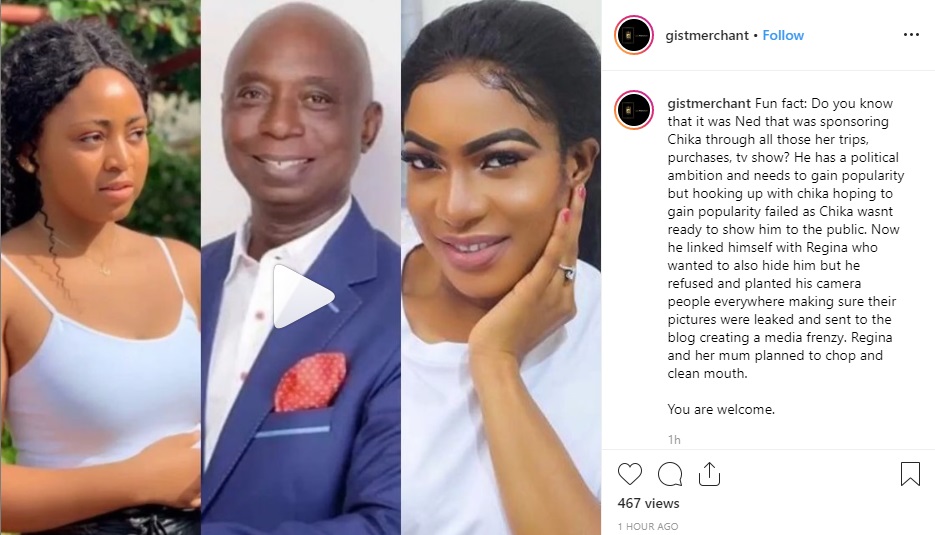 According to an Instagram blogger, Ned Nwoko spent lavishly on Chika Ike before he married Regina Daniels.

Ned Nwoko is said to have needed popularity for his political ambition and needed the actresses to help out.

Chika Ike who he was spending lavishly on was supposed to help him gain popularity but failed because she kept him a secret and refused to make him public.

The politician reported switched to Regina Daniels for his popularity quest. Regina and her mother planned to also keep him a secret and eat his money until Ned Nwoko hired a photographer to take pictures of them and share with bloggers.

Do you know that it was Ned that was sponsoring Chika through all those her trips, purchases, tv show? He has a political ambition and needs to gain popularity but hooking up with chika hoping to gain popularity failed as Chika wasn’t ready to show him to the public. Now he linked himself with Regina who wanted to also hide him but he refused and planted his camera people everywhere making sure their pictures were leaked and sent to the blog creating a media frenzy. Regina and her mum planned to chop and clean mouth.