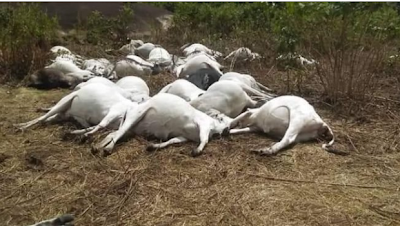 At least eight cows have been struck dead in Ekan-Ile area of Ikare-Akoko in Ondo state.

This comes a month after 36 cows were killed by lightning (pictured) in Ijare community, Ifedore local government area of Ondo state.

The cows were reportedly killed after they strayed to a mountain where the monarch of the town makes sacrifices on an annual basis.

Commenting on the latest incident, a source told TheCable that instead of disposing the dead cows, the owners roasted them and started selling to unsuspecting butchers in Akoko.

But the Ondo government intervened and banned the sale of cow meat in the town.

Yemisi Adeniyi, director of environmental health services in Akoko north-east local government, and Ojo Anthony, her counterpart, from Akoko north-west, said the government had arrested some butchers who were caught taking meat from the dead cows to the market.

The environmentalists led reporters to the scene of the incident on Thursday.

They cautioned the people of Akoko to avoid consuming meats in the next few days.

Kabiru Ismaila, chairman of Butchers’ Association in Ikare-Akoko, said he was working with environmental health officials to prevent people from buying the meat.

Related Topics:Ondo State
Up Next