Aisha's Feud :No One Can Separate Buhari And Mamman Daura...Family
Advertisement 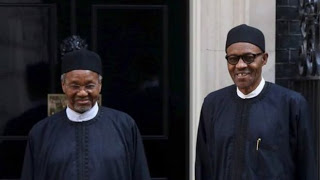 The Daura family insists nobody can separate President Muhammadu Buhari from his nephew, Mamman Daura, despite the feud between Buhari’s wife, Aisha, and his close associate’s immediate family.

Speaking during an interview at the family house of the Dauras in Shaishakowa Quarters in Daura, Katsina State, Mamman Daura’s younger brother, Usman Daura, said Buhari and Mamman Daura had both come a long way.

He said, “Mallam Mamman Daura is the eldest man in our family now. I am his younger brother. The gap between us qualifies him to be my father, despite being my elder brother. But you know Mallam Daura and President Muhammadu Buhari have come a long way right from their youth. Even when President Buhari was the military Head of State in Lagos, they were together. Nobody can separate them.

“If you go to the GRA (Government Reserved Area), where Mallam Mamman has his house in Daura, you will see that his building is next to that of President Buhari. That is how they have been all along. He built his house at GRA even before our father’s death. Our father died on October 3, 1993.”

A Daura-based legal practitioner, who also spoke on condition of anonymity, said, “Mallam Mamman Daura is from Daura, but he is better known in Kaduna since that was where he was based before President Muhammadu Buhari became President.

“Both men are very close. Mamman Daura’s father, Alhaji Dauda Daura, was the President’s elder brother, and they are very close in that family.”

The Chairman of Coalition of Associations in Daura, Alhaji Muhammed Saleh, described Mallam Daura as a disciplined gentleman who is modest and honest.

Another Daura-based legal practitioner and lecturer at the Federal University, Dutse in Jigawa State, Mr Ado Lalu, also said the duo had a very tight relationship.

Besides being close relations, Lalu said Mamman Daura had displayed loyalty and honesty to President Buhari.

He said, “Mallam Daura has demonstrated that in life, it is good to stand by whoever you believe in. He has shown that he believes in President Muhammadu Buhari, no matter what people say.

“Don’t forget that the two gentlemen were together when they did not even know that they would be popularly known personalities. They grew up together in the same family.

“Mallam Mamman Daura’s offence may be that he has not allowed people to poison his mind against President Muhammadu Buhari.

“Also, remember that during President Buhari’s travails shortly after he was ousted from power as military Head of State, Mallam Daura was there for him, playing the role expected of true, concerned and responsible relation. He has never disowned President Muhammadu Buhari.

“Although Daura may not like this being said because he is a modest man, I need to let Nigerians know. Long before President Buhari built his house in Kaduna, he was staying in Mallam Mamman Daura’s house there (Kaduna). Unless you are very close to them, you would not believe that they are not from the same mother, this is just to let you know the extent of their closeness. Nobody can separate them.

“For his closeness to President Buhari, Mallam Daura has suffered persecution, which he would not even make public. And naturally in life, if someone has proved his loyalty to you and all that are yours, you are bound to love him back. It is too late for anybody to come between President Buhari and Mallam Daura.”

In his Kaduna residence along the Inuwa Wada Road, a neighbour, who spoke on condition of anonymity, said Mamman Daura seldom visited the house, but added that domestic workers and guards took care of the expansive compound.

“He (Daura) rarely comes to his Kaduna residence. Whenever he comes, he spends at least three days. Before he comes back, it takes another seven or eight months. Nobody is staying in the expansive compound except domestic workers and guards,” he said.

The feud between the President’s wife and the Daura family became public following a video leaked online in which Aisha was heard complaining about being locked out of a room and demanding that some people should pack their belongings and leave the apartment. The video was recorded by Mamman Daura’s daughter Fatima, who accused the First Lady of attacking her at the Villa.

On return from her two-month holiday in the United Kingdom on October 13, Aisha confirmed in a 25-second voice clip on the BBC Hausa Service website that she was the person in the video in question. She accused Fatima of recording the incident while the security detail did nothing because the culprit was Mamman Daura’s daughter.

Although the wife of the President on October 16 apologised to her children, family members and the public for the embarrassment caused by the viral video, some legal practitioners have condemned Fatima’s action while some simply described the issue as a family affair.

Lawyers divided over the matter

A human rights lawyer, Mr Ebunoluwa Adegboruwa (SAN), in an interview with Sunday PUNCH, said the scuffle between Aisha and Fatima was destroying the President’s immunity and that it might cause a big distraction to him.

Adegboruwa said, “Aso Rock is the official residence of the President and I think it should be restricted to members of his (President) immediate family, but this may not be followed strictly.

“In terms of what has happened between the wife of the President and Fatima, daughter of Mamman Daura, it is quite appalling and scandalous that such has been going on within the precinct of the seat of power.

“First, there is no constitutional provision for the Office of the Wife of the President and that six aides were appointed for that office, it seems the President is the one encouraging the power play that has been going on.

“Second, this is creating a distraction for the President. The constitution envisages the President to be executive in the true sense of it; the President whose mind is at alert and that is why the immunity in Section 308 of the Constitution was created to give the President focus. That immunity is being destroyed now by that domestic and embarrassing scuffle between those close to the President

“I think the President should clear the Villa and get out all those who are not supposed to be there – those who were not voted into office by the people of Nigeria.”

But another Senior Advocate of Nigeria, Mr Nathaniel Oke, said there was nothing wrong with the Dauras living with the President in Aso Rock.

He said, “I don’t think Daura’s family members living with the President have contravened any law. I believe there are separate apartments where they live and the reality on the ground is that they are being accommodated and nothing more than that. There is nothing wrong with that.”

A professor of Law at the University of Jos, Nnamdi Aduba, also said there was nothing wrong with members of the President’s extended family living in Aso Villa.

“I believe the President, as a public officer, is also entitled to some privileges just like some of us in the university system. For example, I live in the professorial quarters and you cannot determine who comes to live with me there. All you can say is that when they come, they will be subjected to the rules here. They should know that they cannot bring any kind of friends and there are things that they cannot do.

“In my view, the President has the right to bring his relations to live with him there. We are in a traditional African society, so we shouldn’t forget this. The only thing is that when their relations visit or live with them in the official quarters, they must behave themselves. They must put on the best behaviour.”

Also, the President of the Nigerian Bar Association, Paul Usoro (SAN), said it was at the discretion of the President to determine those who could reside in the Villa.

“That one (living in the Presidential Villa) is not a legal thing. It is not in the constitution; no stipulation states the number of people who can live there,” he said.

There are indications that Fatima has come under pressure by Aso Rock security and family members not to release the second part of the video of her clash with Aisha.

A source, who is privy to what he described as ‘‘ongoing efforts aimed at mending rough edges’’, told one of our correspondents that there were moves to make sure that the “video is stopped from being released at all costs.’’

He said Buhari and Daura families were shocked when the first part of the video was released by Fatima.

The source said, “It is difficult for the young lady to release the other part of the video. This is because the first one she released has put the Federal Government and President Buhari in a very bad light.

“Also, there are concerns within the security circle, families and friends that she should not be allowed to release the second or whatever part of the video.

“Therefore, she may not go further (in releasing the video). Already, you can see that Aisha has apologised for her action in the video. That is an indication that elders in the two families and government had successfully intervened in the feud.”

The altercation between Aisha and Fatima is being treated by the security services as a domestic affair, it has further learnt.

A senior government official who insisted on anonymity accused the media of trying to “make a mountain out of a molehill.”

He explained that it was normal for members of a family including that of the President to have disagreements, adding that there was nothing unusual about what transpired as was captured in the video in question.
The official said, “I don’t see the issue here. They had a normal face-off over some domestic issues. How does that translate into a national emergency?

“Let me ask you, don’t members of your family have disagreements from time to time? The first family are humans too, they can agree and disagree on any issue just like normal families do.”