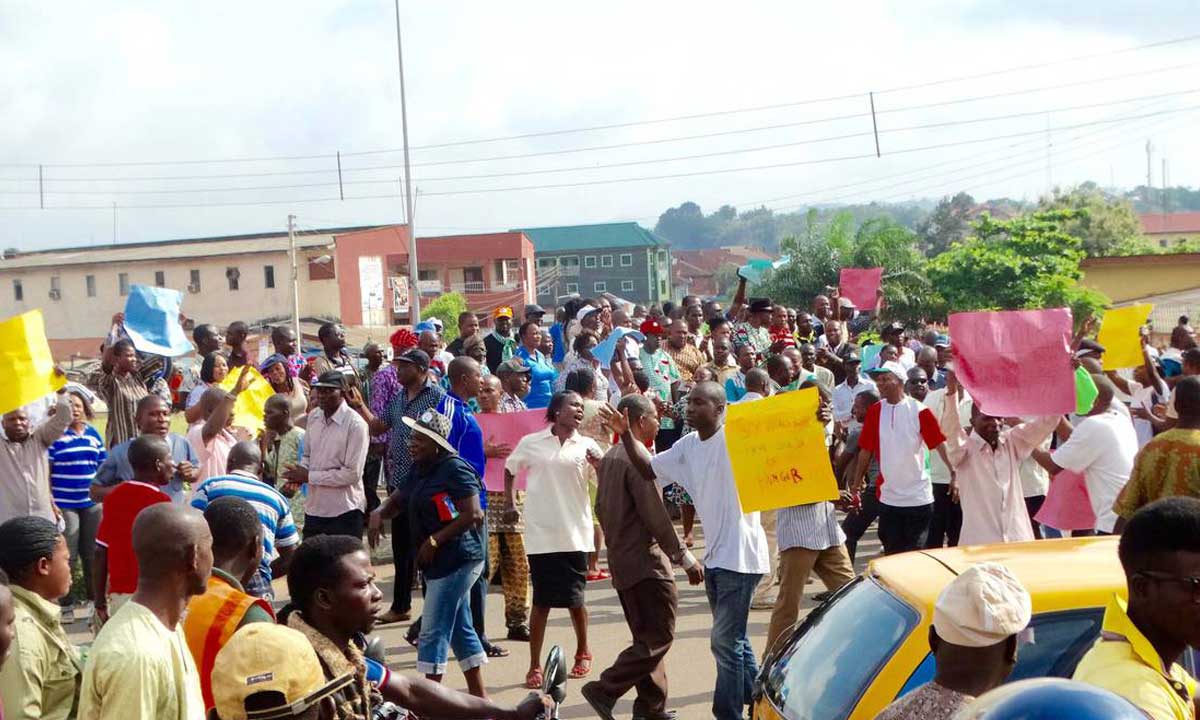 Workers engaged by the Ondo State Waste Management Authority (ODS WMA) have protested over the non-payment of their outstanding salaries and other benefits.

The angry workers, who are mostly sweepers, clerical staffs, attendants and truck drivers lamented that the government had failed to pay their salary spanning into seven months.

The protesters, mostly the sweepers, were engaged by ODS WMA under a public-private partnership arrangement, said that they are also against the government ceding their jobs to the ZL Global Alliance Limited.

Sahara Reporters reported that the state government had in 2018 had a “concession agreement” with ZL Global Alliance Limited-ZGAL for an effective waste management system in the state.

Armed with placards, the aggrieved workers shut down and paralyzed all business activities at the offices of ODSWMA in Alagbaka area of Akure with different solidarity songs.

Some of their placards’ inscriptions read: “We Are Crying For Our Money, June 2016, January 2017, JAN-May 2019, Pay Our Money”; “Enough Of Slavery, We Are Human”; “Pay Us All Our Seven Month Salary”; “Total No To Filling Of Private Company (ZL) Employment Form, Do Not Attach Our Salary To It” while they accused the management of high-handedness.

The protesting workers noted that they have been enduring hard times since the state government refused to pay their salaries, as they could no longer cater to the needs of their families.

Michael Innocent, the ring leader of the protesting workers said that the state government has failed to pay their accumulated salary and areas for thirteen years despite working in an unconducive manner.

“I am one of the workers employed at here at this Ondo State Waste Management Authority (ODSWMA) for over thirteen years.

“And having been working here for such years, the authorities suddenly claimed that they are ceding us into a private company which is ZLGAL.

“But we are saying total NO to it, as we were not employed by a private organization. So, why attaching our salaries to the private firm” he said.

Comrade Innocent argued that they decided to maintain their jobs with the state government, which initially employed them since there was no concrete agreement of transfer.

According to him, the angry workers could not offset their necessary bill including their children tuition fees due to non-payment of their salary and other entitlements.

However, he maintained that appeal made to Ondo state government to look into their plights didn’t achieve any positive result.

“We decided to stand by our right to retaining our appointments as staff of the government and in doing so, they have failed to pay our salaries. They failed to pay us because we didn’t renew our job with the private company and now they are owing us seven-month salaries from June and July 2016 & January to May 2019.

“We are crying to authority concern to come to our aides to salvage our soul from this perdition, they should save us from this cruelty and marginalization from this Ondo state waste management authority. We are already dying of hunger on a daily basis. Life is becoming more unbearable and even miserable as many of us have kids in schools.

“We could not pay their school fees while some are not in school due to lack of money to pay for their charges and some of us owe our landlord and we cannot pay our bills too. We have overstayed, we have been working for over thirteen years here and there is no confirmation and we say enough is enough of stagnancy and enough of dehumanization and inhumane treatment,” he added.

See also  What Many Will not tell you About Azuka Okwuosa

Another protester, Adekunle Adeola noted that the specification of their jobs was spelt out in their letters as written in the civil service rules and regulation.

She wondered why Governor Rotimi Akeredolu led government in the state would not permanent them (workers) before ceding them to the waste management private firm.

“All of us have employment letters and we were issued an identity card and we had been employed here for the past thirteen months. We were surprised when they said they are ceding us forcefully to a private company but we said total No to it. They refused to give us a permanent letter while also cheating us with all our entitlement,” Mrs. Adeola said.

Sahara Reporters could not get the reactions of the General Manager of the Ondo State Waste Management Authority, ODSMA as of the time of this report.