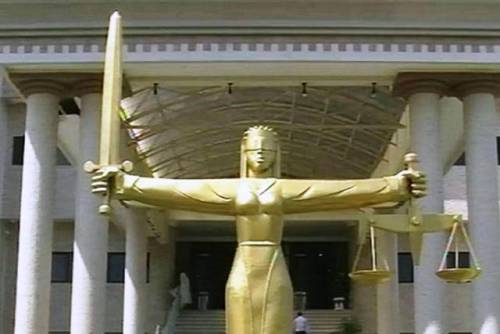 A Federal High Court in Ikoyi, Lagos, has restrained Security and Exchange Commission (SEC) from taking any​ step concerning or acting on its decision contained in its letter of May 31, 2019 imposing a fine of N91,125,000.00 on Mr. Adewale Tinubu and barring him and Mr. Omamofe​ Boyo from being Directors of public companies for a period of 5years​ pending the determination of the substantive suit filed before the court​
​ ​ ​
Justice Mojisola Olatoregun granted the order sequel​ to an ex-parte application accompanied with an affidavit of urgency filed before the court by Dr. Olisa Agbakoba SANl leading two other senior Advocates of Nigeria Messers Tayo Oyetibo and Oluyede Delano​ ​
​ ​ ​ ​ ​ ​
In an affidavit sworn to by the Deputy Group Executive Officer of Oando Plc Mr. Boyo, the deponent averred that by letter dated May 18, 2017, SEC wrote to Oando requesting for a response to allegations in a petition written by Asbury Inc. Investment company and Alhaji Dahiru Mangal dated May 2, 2017, alleging abuse of corporate governance and purported mismanagement of Oando ‘s business.​
​ ​ ​
Oando was reported to have duly addressed all the allegations in the petition through its letter dated May 24, 2017. Other letters written by SEC concerning this issue was equally addressed.
​ ​
Thereafter, the commission suspended trading on​ Oando shares. However, due to the negative effects of the suspension, the company instituted a legal action against the SEC to challenge its decision.

The matter was later taken to a court of appeal where the case was struck out for lack of jurisdiction by the federal high court in Lagos.​ ​
​ ​ ​
Following discussions with SEC, it was agreed that the suspension should be lifted whilst Oando withdraw its appeal against the​ ruling of the Federal high court, while Akintola Deloitte was retained as sole forensic auditor to conduct the forensic audit of the company​
​ ​
The company did not receive any further communication from the SEC until May 31, 2019, when it received the commission’s letter informing it of the conclusion of​ Deloitte’s audit​.
,
​ In its letter, SEC decided and stated thus: “Mr. Tinubu pay the sum of N91,125,000.00, to SEC for breaching section 60(2)of the investments and securities Act​ 2017 for certification of untrue statements of material facts in Oando 2013,2014 and 2015 financial statements, and, Mr. Tinubu and Mr. Boyo be barred from being Directors of public companies for five years for improper conduct in managing the affairs of Oando.​”
​ ​ ​
Mr. Boyo averred further that SEC’s letter is devoid of material or particulars which would provide them with information, reasons, grounds or specific actions alleged to have been taken by them which constitute wrongdoing under the law,neither were they interviewed by either Deloitte or SEC nor invited to appear before SEC to defend or respond to SEC’s findings as SEC’s letter which convey its findings also imposed sanctions on him and Tinubu.​
​ ​ ​
Despite not providing them with an opportunity to respond to the Deloitte​ audit report and the allegations contained therein, SEC proceeded to purportedly appoint Mr. Mutiu Adio Sunmonu as head of interim management of Oando. They verily believe that his appointment would interfere with their management of Oando company.​
​ ​ ​
Mr. Boyo contended that if the injunctive orders being sought were not granted and SEC continued with its actions, an irreparable loss would be caused to Oando through the collapse of its share price.

Is Adams Oshiomole A Secret Weapon Of The PDP? By Femi Aribisala