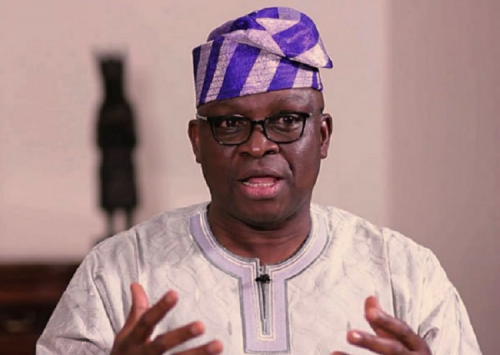 Both defendants have entered a no-guilty plea to the N2.2bn fraud charges pressed against them by the anti-graft agency.Recall Economic and Financial Crimes Commission arraigned Fayose, alongside a firm, Spotless Limited before the Federal High Court in Lagos October, 22nd 2018 six days after he bowed out of office as governor.

Led in evidence on Friday by the prosecuting counsel for the Economic and Financial Crimes Commission, Mr Rotimi Jacobs (SAN), Falai told the court that though he now works with Ecobank, he was in the employment of Skye Bank, now Polaris, as of 2016 Falai, who said he worked in the real estate department of Skye Bank, narrated to the court how the bank put up for sale a property known as No.44, Osun Crescent, Maitama, Abuja for the sum of N200m.

He said after an offer and a counter-offer, Skye Bank eventually issued a letter offer to one Signature Integrated Limited in respect.

”In one of the charges against Fayose, the EFCC had alleged that he purchased a property known as No.44, Osun Crescent, Maitama, Abuja for N200m in the name of “your elder sister, Mrs Moji Oladeji.”Falai told the court that Skye Bank received the N200m payment “from a Zenith Bank account named Still Earth Limited.

”He said the N200m was transferred.The Head of Operations at the Ado Ekiti branch of Zenith Bank, Johnson Abidakun, who testified on Thursday in the case as the 5th  prosecution witness, had told the court how Fayose allegedly enlisted the services of the bank to move N200m cash from his residence at Afao Ekiti in April 2016 and the money lodged into the account of Still Earth Limited.

Under cross-examination by Fayose’s lawyer, Mr Ola Olanipekun (SAN), on Friday, the sixth witness, Falai, said he could not tell if there was any transaction between Still Earth Limited and Signature Integrated Limited to which Skye Bank offered the N200m property.

Justice C.J. Aneke adjourned further proceedings in the matter till May 18.