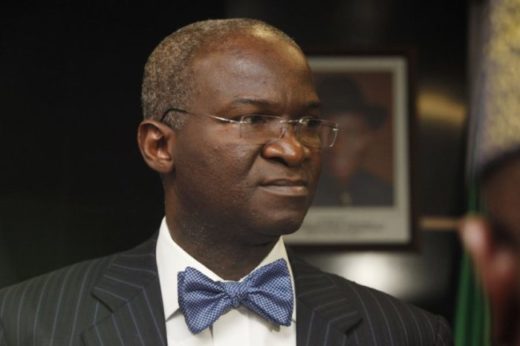 According to Channels Television the former minister described the achievement of this government as one of a kind, saying perhaps only a few or no other government has recorded such feat.

Fashola was quoted as saying instead of engaging in one activity at a time like different nations, Buhari’s government engaged in several infrastructural projects simultaneously.

“This government is doing something that I don’t think many, if any nation has done before. They are building the entire infrastructure at the same time ports, airports, rail, roads, power, all simultaneously at the same time,” he was said to have told reporters in Abuja.

“Often times, what most countries do is to finish one then go to the other. And it is because we have outgrown our infrastructure as a nation. And that is why you will see the commitment of the president to projects like the second Niger bridge, the Igbodo-Ogoni bridge, the Mambilla power plant, the Lagos-Ibadan expressway, all of these is going on at the same time.”

He added that Buhari would deliver more dividends of democracy to Nigerians during his second term.

See also  How PDP deceived themselves with rumours of Buhari’s wedding with new bride – Presidency
Related Topics:Babatunde Raji FasholaFGMinister of PowerPresident Muhammadu BuhariWorks and Housing
Up Next