'I Have Left N42.5bn For Next Imo Governor' ― Rochas Okorocha Says
Advertisement 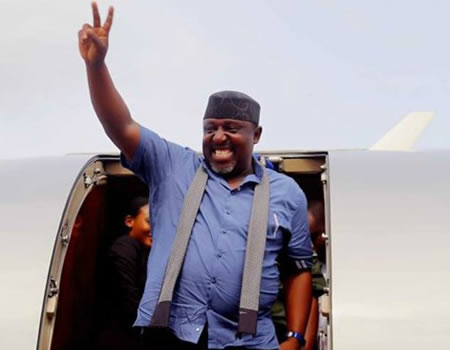 Governor Rochas Okorocha has assured Imo State people that he is leaving in the coffers of the state enough funds for incoming governor, Mr Emeka Ihedioha to work with.

Okorocha disclosed this while swearing in new permanent secretaries, a new accountant general and a new head of service at the Government House, Owerri on Monday.

He said that the sum of N42.5 billion had been kept so that the incoming administration would not experience financial setbacks.

He also stated that N7.6 billion had been set aside for renovation of schools across the state and N21.6 billion for the construction of rural roads.

Addressing the new permanent secretaries, the governor advised them to do their best to reposition the civil service in the state, protect the integrity of the state, and to shun corruption.

In his words: “My government has kept aside a total of N4.5b for the incoming government, and for that reason, I will set up a sub-committee to make sure that the projects they are attached to, come to fruition even when I am out of office because the government is a continuum.

“I, therefore, charge you to serve our dear state with all your might just as I have.”

The new Head of Service is Mrs Ngozi Eluma, while the permanent secretaries are: Mr Donald Igbo, who will double as Accountant General; Mrs Edith Ekenze, Mr Elias Anyanwu, and Mr Justus Oguoma.