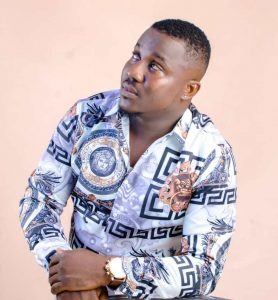 Oladotun Owolabi Ogunlabi is one of the superb voices in modern Juju music. Known on stage as Dotun Future, the Osun State born harmonious crooner says in this interview with the Editor, FOLORUNSHO HAMSAT, he wishes to rule the world with his Gospel Juju brand. Among other issues, Dotun also shares his 20-year experience rising steadily from an obscure backup vocalist to being a promising doted-on singer, the public unveiling of his latest music album, and more.

Songs That Launched Me Into The Market

“I have done four music albums since I started 20 years ago. The title of the first album is ‘Alaanu Mi’ (My Helper) which was released in 2009; I did the second album in 2013 tagged ‘Give Thanks’ (S’ope) which actually launched me to the market because it was everywhere. The third one I waxed in remembrance of my mother who passed on at that time, it was titled ‘Tribute to My Mother’. The latest album about to be launched is titled ‘Father, Who Have You Sent To Me’ (Baba Taa L’e Ran Simi). I thank God, though the success has been steady, it is assured.”

My Hope on The New Album

“I have confidence that this latest album will promote the much desired transformation in my music career. The album is yet to be launched and it is already an anthem. That means it is my time to shine.”

“I’m just starting. I still have a long way to go. No man is an island. I’m not fulfilled yet. That is why I’m not alone. I have people who will never get tired of supporting me. Everyone needs a helper to get to his or her destiny. So, I’m growing because I have people behind me. I have a track in this new album where I sang ‘no man can survive without support. That is why I will forever appreciate my father, Primate Elijah Ayodele, who, apart from God, is my source of joy in life. He is the source of everything that I am today. Of course, it is God but God would not descend to help a man, He will send a man. He is the man God sent to me.”

“I have gained a lot of experience traveling outside Nigeria. I have been to London for shows about four times since I started singing Juju. I have been to South Africa for performance and I had performed in different states in the US. As we speak, we are discussing three new shows that would take us back to London, Canada and Turkey. And the trips have been yielding fruits, to the glory of God. We make money abroad, I have to be honest. The only challenge we face is that drummers and instrumentalists abroad are the king. They are there for hire and you have to pay whatever they demand since musicians at our middle level have not been able to travel with our local band. But I believe we are going to get there someday.”

Singing Abroad is A Plus

“I have noticed that people do rate musicians who have performed abroad higher than those who have not traveled outside their domain. That is the truth. Going overseas to play is a plus for any artiste, especially artistes from Nigeria. If an organizer in Nigeria is paying you say, N1000 to perform at a show, once you travel and come back, he would raise your fee to N2000. So, traveling abroad adds a class.”

“I prefer shuttling between Nigeria and abroad than staying permanently abroad. All of us cannot stay abroad. If we do, who will be home to entertain Nigerians? I believe my success is here in Nigeria.”

My Brand of Music

“I sing complete Juju full of prayer songs. Juju music this time is difficult to classify. Even our fathers in the genre, Chief Ebenezer Obey and King Sunny Ade, their music from the onset was full of prayer and messages. I’m following their path. Whether it is Afro Juju, Juju Gospel or Tungba Gospel, we are all singing Juju music because Juju music has its root in the church.”

What Inspires Me on Stage

“I can’t really explain in details how I am inspired but once I grasp the microphone, the songs will keep rolling. I don’t take alcohol, just water. People need to understand that when you are gifted and have passion for what you are doing, you are naturally inspired. You don’t need to drink wine or spirit to get high. Basically, I’m inspired by my environment.  For instance, when the pastor calls for prayer during church service and others are praying, I would be doing my own prayer in song. Sometimes, I get inspired while driving. That is how I am inspired. So, ultimately it is God.”

“Sir Shina Peters is the one I love most in my industry. Apart from our fathers that I mentioned earlier, King Sunny Ade and Chief Ebenezer Obey who are our idols, SSP is the man I adore most because he revolutionized Juju music when it seemed the flame of Juju was backsliding. I have always looked up to him as my role model. I love him. I also love and respect others like Wale Thompson, Yinka Best, Segun Nabi, Mega ’99, and several others. I thank God for elevating me too.”

My Journey Into Music

“I started singing Juju twenty years ago. Though, I had been a member of the INRI church choir in Ilasamaja, Lagos before then, it was in 1999 I veered into Juju music. While singing in the church as a backup vocalist, someone discovered that I had the gift of voice even better than the lead choir, so the person advised me to do something different. That was how I found myself singing Juju.”

Challenges on Way to Stardom

“There is no smooth road to success, like they say. I had encountered different kinds of challenges on my way to the limelight. There was this particular funny case that happened in 2006 when we went to perform at a certain celebrity woman’s event. Just as we mounted the stage and started singing, one of the female friends of the celebrant just ordered us to stop that she wanted to receive a phone call. Though, I was stunned, I asked my band to stop. When the woman finished taking her call, I went to her and asked politely if we could continue with the performance, and she said ‘you can go on making your noise, please’. I felt humiliated and asked myself that, “so it was noise I had been making all this while and I thought I was singing?”

See also  We Will Run an All Inclusive Government -Kendoo

Like they say, there is blessing in every disappointment. It appeared that God used the woman to arouse my destiny because I asked God right there that this noise that I’m making, let it become the source of my joy. Today, I’m thanking God. There had also been instances when we had arrived late to shows due to circumstances beyond our control and the organizers had asked us to return their money. These were occasions when we were held in the traffic and despite that our musical instruments had arrived at those events before us. So, God has been good all the way.”

“My new album will be launched on Sunday 26th of May, 2019 at Supreme Lounge (former Intro Lounge) on Oba Akran Way, Ikeja. My father, Primate Ayodele, will be the father of the day. We are also having Olusho Calvary Olayinka and Hon. Fatoba who is one of my great fans, and a whole lot of other important personalities. My distinguished colleagues like Lanre Teriba, Segun Nabi, Saint Janet, Mega ’99, SL, Tola Obanla, and many others, would be there to support me. It’s going to be a music night full of praise, grace and fun.”

“My happiest day was the day I obtained UK Visa. I was happy that at last I was going to see London. And it happened in my birth month. Why I was extremely happy was because I had always drove to pick persons coming to Nigeria at the airport and each time I would tell God that, ‘please, as I’m picking people coming from abroad, let it happen too that someone would be picking me at the airport on my way from abroad. To God be the glory, my prayers were answered.”

My Ultimate Target in Life