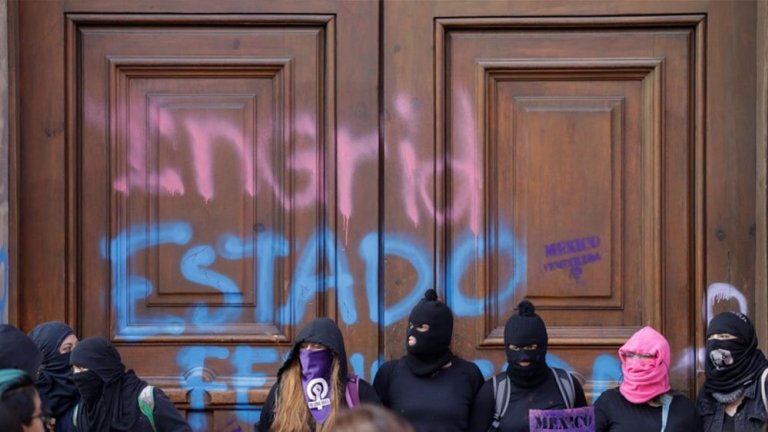 Dozens of activists flocked to Mexico’s presidential palace on Friday to protest against violence against women, chanting “not one murder more” and splashing one of its large, ornate doors with blood-red paint and the words “femicide state”.

The heated Valentine’s Day demonstration, led by women, stemmed from outrage in recent days over the killing of 25-year-old Ingrid Escamilla in Mexico City and the publication of graphic photos of her mutilated corpse in newspapers.

One protester spray-painted “INGRID” in tall pink letters on another palace door in tribute. Many participants noted that her death was only the latest example in a wave of brutal murders of women that have been dubbed “femicides”.

An average of 10 women are killed a day in Mexico, and last year marked a new overall homicide record, official data show.

“It’s not just Ingrid. There are thousands of femicides,” said Lilia Florencio Guerrero, whose daughter was violently killed in 2017.

“It fills us with anger and rage.” She called on President Andres Manuel Lopez Obrador, who was inside the palace as the protests continued, to do more to stop the violence.

Others graffitied slogans including “they are killing us” on the building’s walls and ejected bright flames from cans of flammable spray paint.

President Andres Manuel Lopez Obrador attempted to reassure the activists during his morning news conference. “I’m not burying my head in the sand …

The government I represent will always take care of ensuring the safety of women,” he said, without detailing new plans. Protesters also admonished the newspapers that published photos of Escamilla’s corpse, chanting, “the press is complicit”.