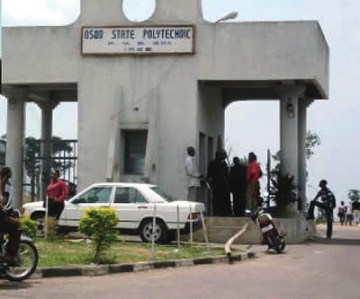 Irate students of the Osun State Polytechnic at Iree on Saturday set the school clinic and medical equipment ablaze over the death of one of their colleagues, the News Agency of Nigeria (NAN) reports.

Timely intervention of the school’s security officials was said to have prevented the fire from spreading to other buildings in the school.

It was learnt that one Aminu Hammed, a Higher National Diploma student of the institution’s Department of Applied Chemistry, slumped in the examination hall on Friday and was rushed to the school clinic, where he later died.

The protesting students, who stormed the clinic on Saturday morning, alleged that there was no medical personnel at the clinic to attend to Hammed when he was rushed to the clinic.

During the protest, the school’s ambulance, drugs and equipment in the clinic were set ablaze by the students.

When contacted, the Public Relations Officer of the school, Mr Tope Abiola, said that apart from the burnt clinic, property worth millions of naira were also destroyed by the students.

Abiola said that drugs, equipment, vehicles as well as medical facilities were razed down by the inferno.

He, however, said it was not true that there was no medical personnel to attend to Hammed when he was brought to the clinic.

Abiola said that when Hammed was rushed to the school clinic at about 4:30 p.m. on Friday, medical personnel on duty made frantic effort to resuscitate him but to no avail.

He said that Hammed was immediately referred to another hospital in town where he later died.

“It is very shocking to us that the institution would lose such a precious soul.

“He slumped shortly after writing his examination in the hall and he was immediately rushed to the school clinic.

“He was a Muslim and he was observing the Ramadan fasting.

“He would have slumped, due to loss of stamina. He was buried on Friday evening in his hometown, Oba’agun, community close to Iree.

“We sympathise with his family and we pray to God to console them.”

Abiola, however, said to forestall breakdown of law and order on campus, the school’s management had ordered immediate closure of the institution.

He said that all students had been directed to vacate the campus with immediate effect.

On Sanwo-Olu’s eventful one day in office

Agbaje: These are dangerous times, what Buhari should do on insecurity