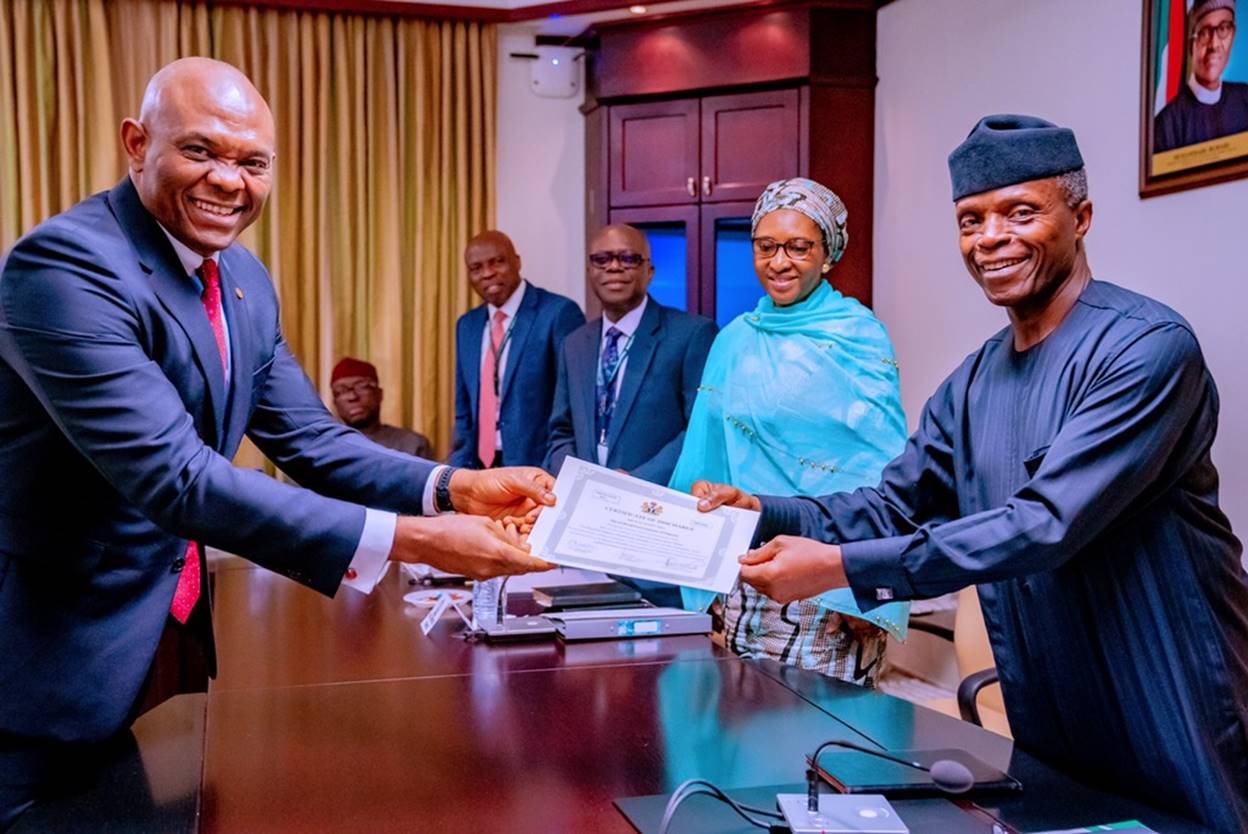 The National Council on Privatisation (NCP) at its meeting today, presented Transcorp Hotels Plc with a Certificate of Discharge, indicating the company has fulfilled all privatisation conditions attached to the sale of the hotel and will no longer be subject to any post-privatisation monitoring. At a ceremony that took place at the Presidential Villa, the Vice President, Professor Yemi Osinbajo SAN GCON, who chairs the Council presented the certificate to Mr. Tony O. Elumelu CON, the Chairman of Transnational Corporation of Nigeria Plc (Transcorp), the core investor in the hotel.

Speaking at the event, Mr. Alex Okoh, the Director-General, Bureau of Public Enterprises (BPE) stated that Transcorp excelled at achieving the KPIs established during the monitoring and evaluation of the asset. Key areas of achievement include an increase in customer base by 113%, increase in service excellence captured by an 82% decrease in customer complaints, and an increase in operational efficiency with retained earnings rising to 70% of turnover.

“The success achieved by the Hotel has evidently proven both the diligent process of implementing the privatisation programme on one hand and the commitment and professionalism of the Management Team of the Hotel on the other,” he said, adding that “The approval is sequel to the review and analysis of the outcome of our routine performance evaluation earlier conducted on the Hotel, which clearly indicates that the achievements recorded by Transcorp Hotels are in line with all the covenanted obligations embedded in the Share Sale Purchase Agreement (SSPA)”.

Recall that in 2005, Transcorp emerged the core investors in the privatisation of the hotel asset, which later became Transcorp Hotels Plc in 2014 following a decision to make this iconic asset available to the investing public as shareholders. The company later extended its reach to Calabar operating as Transcorp Hotels Calabar and further acquired strategic properties in Lagos and Port Harcourt where it intends to develop new hotels.  In 2018, Transcorp Hotels completed a USD$100m upgrade of the iconic and multi-award winning Transcorp Hilton Abuja, which was a key factor that led to the final discharge of the company by the BPE from further post- privatisation obligations.

Commenting on this, the Chairman, Transcorp, Mr. Tony O. Elumelu, CON, receiving the discharge certificate said “Our group is known for business turn around and value creation and I support public-private partnership as a viable option for catalysing our economic development. For public-private partnerships to work and become a viable approach for the transformation of our country, privatised entities and their owners must justify government’s confidence in them by visibly improving the acquired assets, create jobs, and increase government revenues. Such positive outcomes will encourage the government to privatise more national assets and free itself of revenue for critical social and infrastructure sectors such as education, healthcare, roads, transportation, etc.” He also commended this government for its efforts in driving economic development in Nigeria.

Also speaking on the discharge, the MD/CEO of Transcorp Hotels Plc, Owen Omogiafo said, “This is a significant milestone in the history of our company and a further demonstration of our long-term commitment to improving lives and transforming our nation.

The hotel recently won the prestigious World Travel Awards 2019 in five categories including Africa’s Leading Business Hotel and received the Signum Virtutis (Seal of Excellence) in the Hotels Sector for Nigeria at the 2019 Seven Stars Luxury Hospitality and Lifestyle Awards.