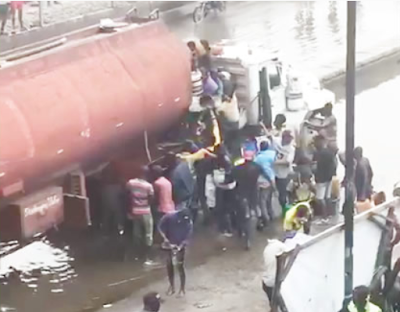 There was drama on Tuesday as a petrol-laden tanker ran into a container lorry in the Mile 2 area of Lagos State.

It was gathered that the tanker driver, had in a bid to avoid a mild traffic, ignored the directives of officials of the Lagos State Traffic Management Authority and rammed into the container lorry around 11am.

Our correspondent learnt that the tanker was punctured by the side as a result of the crash, causing intense fuel spillage that sent shivers down the spines of commuters and traders in the area.

An eyewitness, Gabriel Adekunle, while blaming the tanker driver for the incident, said it would have been averted if he had obeyed the LASTMA officials directing traffic in the area.

Adekunle stated, “The tanker driver was not patient as the LASTMA officials had directed him to go through another route, but he ignored them and drove in another direction. It was when he ignored the officials that he ran into the container lorry, which punctured it and fuel started spilling on to the road.

“Because of the hardship in the country, people around the area started using bowls to steal the fuel. But some community members, traders and drivers’ union members at the garage cautioned them against scooping the fuel for fear of an explosion.

“It is wrong to say that hoodlums were the ones, who punctured the tanker to scoop fuel; the driver was the one at fault because he refused to obey the LASTMA officials.”

Another eyewitness, Adewale Adejumo, said the remaining fuel in the tanker was tansferred to another tanker, adding that the incident caused gridlock in the area.

Adejumo stated, “Policemen and LASTMA officials cautioned the people against scooping the fuel to avoid a fire incident. The remaining fuel in the punctured tanker was transferred to another tanker, but the incident caused serious gridlock under the bridge at Mile 2.

“The tanker driver was driving inward Orile when the accident occurred; it was the LASTMA officials, who informed the fire service and it took their personnel around 45 minutes to get to the scene. Normalcy has been restored in the area and the vehicles have been removed from the road.”

However, Nigerians condemned those, who took advantage of the situation to steal fuel, while ignoring the inherent danger.

See also  Nothing will separate me from OPC -Lateef Jakande

Notable among those who reacted to the incident was Michael Collins, aka Don Jazzy, who wrote on his Instagram handle, “Poverty won’t allow us to be educated or have common sense.”

When contacted, the acting General Manager, Lagos State Fire Service, Margaret Adeseye, said personnel of the agency, who were mobilised to the scene, used chemicals to neutralise the fuel that was spilt on the road to prevent a fire outbreak.

“My men were at the scene to rescue the situation and prevent an inferno. We cannot rule out the chances of people scooping fuel, so our men were on the ground to prevent the situation from escalating and used chemicals to neutralise the spilled fuel to prevent a fire outbreak,” Adeseye stated.

This is illiteracy coupled with stupidity with its anchor steady on greed.
They are a spark away from being burnt offerings
This happened in Mile 2, Lagos. pic.twitter.com/GqU04jHWk0

Related Topics:Lagos State
Up Next