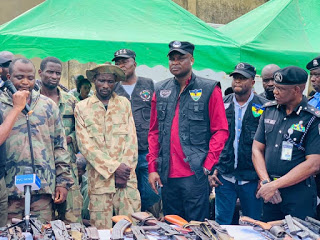 The Nigerian Police through its IRT team led by DCP Abba Kyari has arrested 81 notorious kidnappers and armed robbers.

Also recovered from the gangs was a sum of N10m cash which was a ransom paid to the kidnappers.

These includes: The Kidnappers who Stroke Along Abuja-Kaduna Expressway on 26/8/19 Killed INSPR Yohanna Patrict and Kidnapped Some innocent Nigerians.

The Kidnappers Who killed 4 IRT Personnel in Kaduna State August Last year And 3 of the Rifles belonging to the late IRT personnel Recovered from them.

The Kidnappers who Kidnapped a Honorouble Member in Sokoto State and Many Other kidnappers Terrorizing Abuja-Kaduna-Kano express way, Niger and Taraba States were all Arrested.

All the Deadly kidnappers and Armed robbers that Confessed to their Crimes were Paraded before the Press today 21/10/19 by the Force Public Relations officer (FPRO) DCP Frank Mba.

Kudos to IGP Adamu Mohd, Kudos To Nigeria Police force and Kudos To IRT and STS.”

Related Topics:DCP Abba Kyari
Up Next